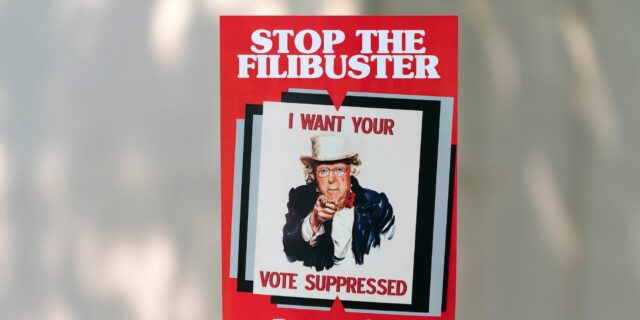 Welcome back to 10 Things in Politics. Sign up here to receive this newsletter. Plus, download Insider's app for news on the go – click here for iOS and here for Android. Send tips to [email protected].

Here's what we're talking about:

In voting-rights fight, progressive activists see a 'make-or-break moment' for changing the filibusterThe FDA is pushing forward on boosters for millions of AmericansFacebook's recent trademark filings hold clues to the company's new name 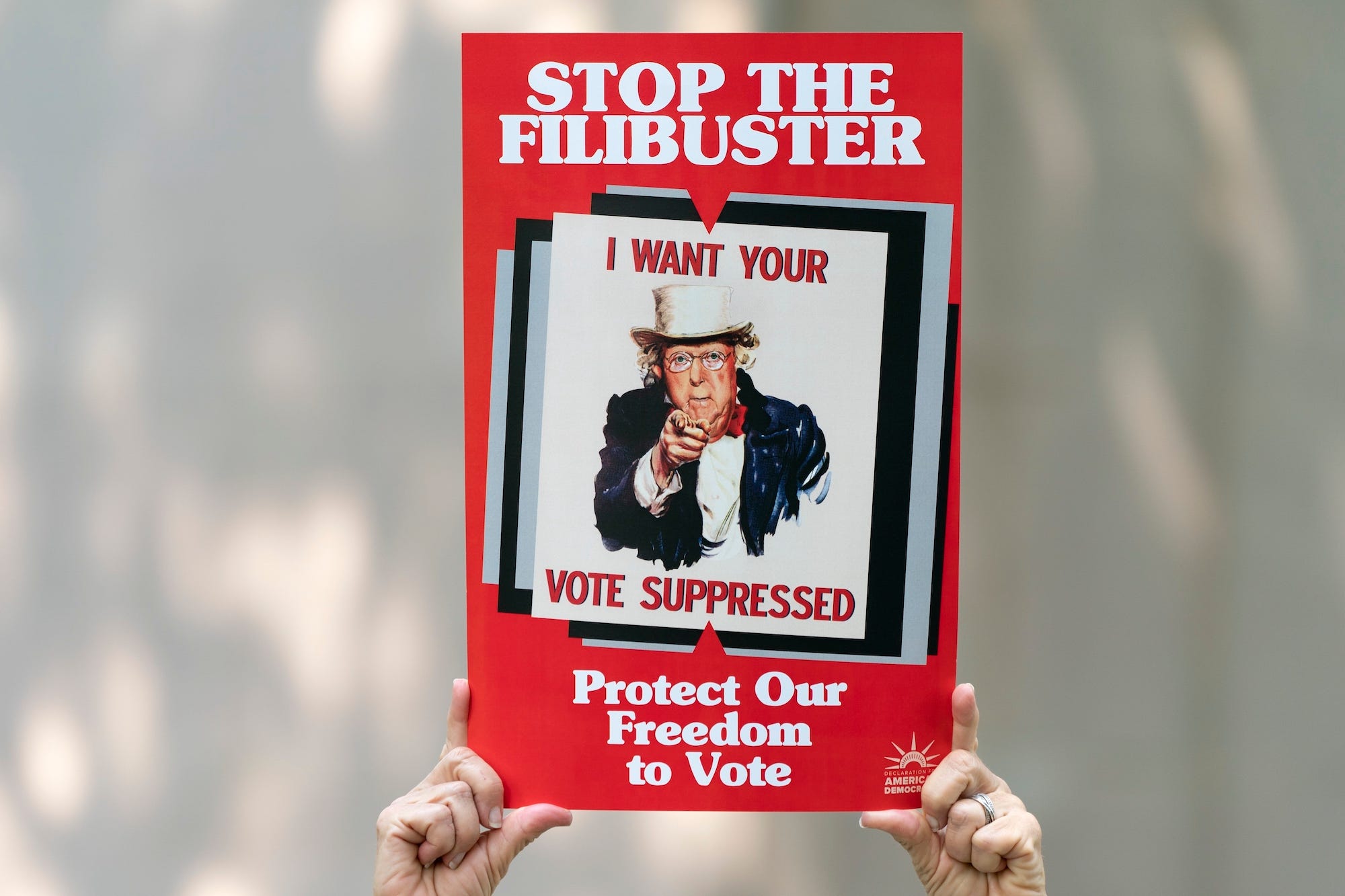 Virginia Shadron, of Atlanta, holds an anti-filibuster sign with the face of Senate Minority Leader Mitch McConnell of R-Ky., on it, during a rally in support of voting rights, Tuesday, Sept. 14, 2021, on Capitol Hill in Washington.

Progressives are losing patience: "Their frustrations stem largely from the disconnect between Biden describing the new GOP election laws as 'the most significant test of our democracy since the Civil War' and his failure to endorse procedural changes to address it on the federal level," my colleague Grace Panetta wrote. Republicans have criticized the bill as a massive federal overreach into state authority.

There still isn't enough support to change the filibuster: The only way for Democrats to navigate around the GOP's opposition would be to change the chamber's de facto 60-vote threshold for most legislation. Adam Jentleson, a former top staffer to Senate Majority Leader Harry Reid, said calling for changes to the filibuster "would be a Nixon-going-to-China moment on this issue" for President Joe Biden given his decades in the chamber.

Some minds are changing, though: "I think I've come down and decided that democracy is more important than a Senate rule," Sen. Angus King, an independent from Maine who caucuses with Democrats, told reporters of his evolution on the subject. Still, all 50 Senate Democrats would have to support any change, which seems unlikely given Sens. Joe Manchin and Kyrsten Sinema's repeated defense of the current rules.

Read more about how progressives are trying to break through on voting rights.

2. FDA pushes forward on boosters for millions of Americans: The Food and Drug Administration authorized booster shots for Moderna's and Johnson & Johnson's COVID-19 vaccines, joining the already-available Pfizer-BioNTech booster. Unlike the other two major shots, the FDA authorized a booster for anyone who received the Johnson & Johnson vaccine. Otherwise, federal officials are still limiting their recommendations to people ages 65 and older as well as younger people at high risk of severe disease. More on two new booster shots, which could be going into arms by the end of the week.

3. Biden dives into the final push for his agenda: Biden has accelerated his involvement in talks over his party's massive social-spending plan, diving into policy details with lawmakers as they seek to trim off trillions from the initial $3.5 trillion price tag, The Washington Post reports. Biden has suggested nixing free community college in favor of universal pre-K and floated the possibility of a prepaid debit card for older Americans to spend on dental benefits. More on what lawmakers are saying and doing behind closed doors. 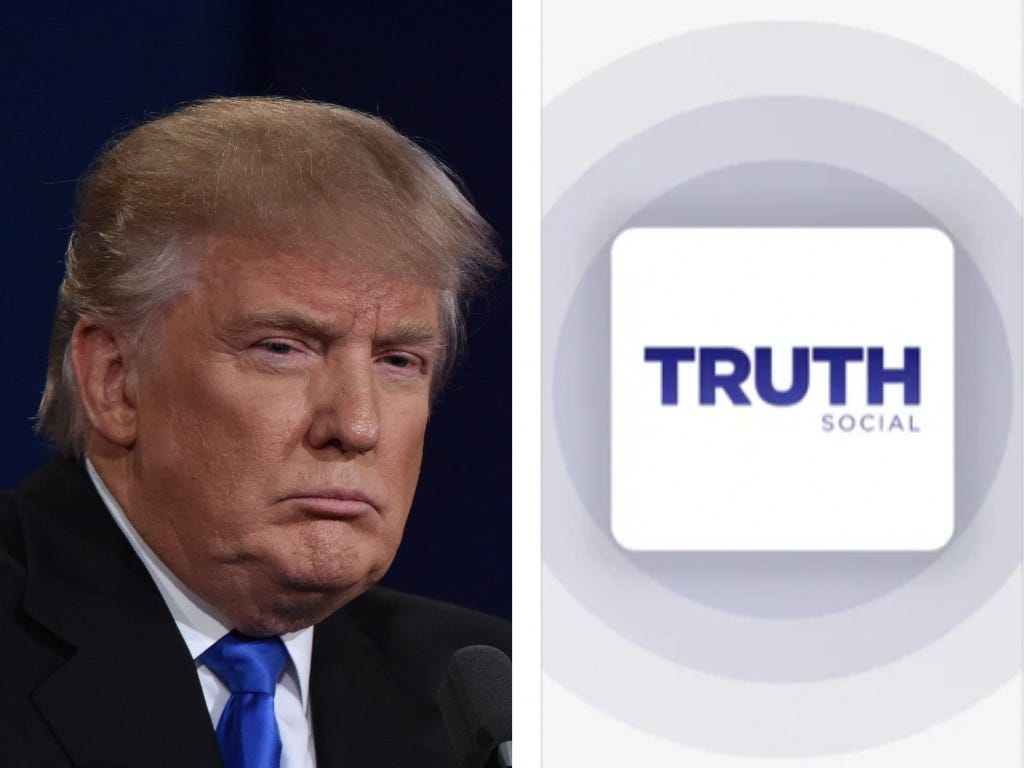 Former President Donald Trump on Wednesday announced plans to launch his own social network, Truth Social, in the first quarter of 2022.

4. Trump unveils plans for his own social platform: Former President Donald Trump's newly announced Truth Social, planned for a 2022 launch, appears to have a user interface that closely resembles Twitter's. Expected features include letting people "follow" one another and repost messages. Here's what else you need about Trump's plans for a return to social media.

5. There are some clues about Facebook's new name: Facebook is going all in on the "metaverse" and may even change its name to reflect its new focus. Some clues about its under-wraps new name – expected to be announced next week – might be in the seven new trademarks filed since February along with a host of new symbols. Read more about the speculation over the future of the social network.

Twitter CEO Jack Dorsey trolls Mark Zuckerberg over his metaverse plan: Dorsey indicated that he thought the idea was dystopian.

6. Parkland suspect pleaded guilty on all charges related to the 2018 massacre: Nikolas Cruz, 23, pleaded guilty to 17 counts of first-degree murder and 17 counts of attempted murder in the first degree for the shooting at Marjory Stoneman Douglas High School. A jury is set to decide whether Cruz gets the death penalty. More on the hearing.

7. Apparent human remains were found near Brian Laundrie's belongings: The FBI said the suspected remains were discovered in a previously flooded area in Florida near where authorities had been searching for Laundrie for weeks. Laundrie is described as a person of interest in the murder of his fiancée, Gabby Petito. More on the news.

8. Tesla continues to rake in money amid the supply-chain crisis: Tesla posted "​​​​a third consecutive record quarterly profit," The Wall Street Journal reports. The company delivered about 73% more vehicles than it did a year ago, and its bet on the Chinese market is continuing to pay off. Here's why analysts say that Tesla is better positioned to deal with issues like the global chip shortage than other automakers.

9. COVID-19 rages on in Russia: President Vladimir Putin ordered a one-week paid shutdown for Russian workers. Coronavirus cases and deaths have risen in recent weeks in Russia, and officials hope the stay-at-home orders can mitigate further spread. Only about a third of Russian citizens are fully vaccinated. 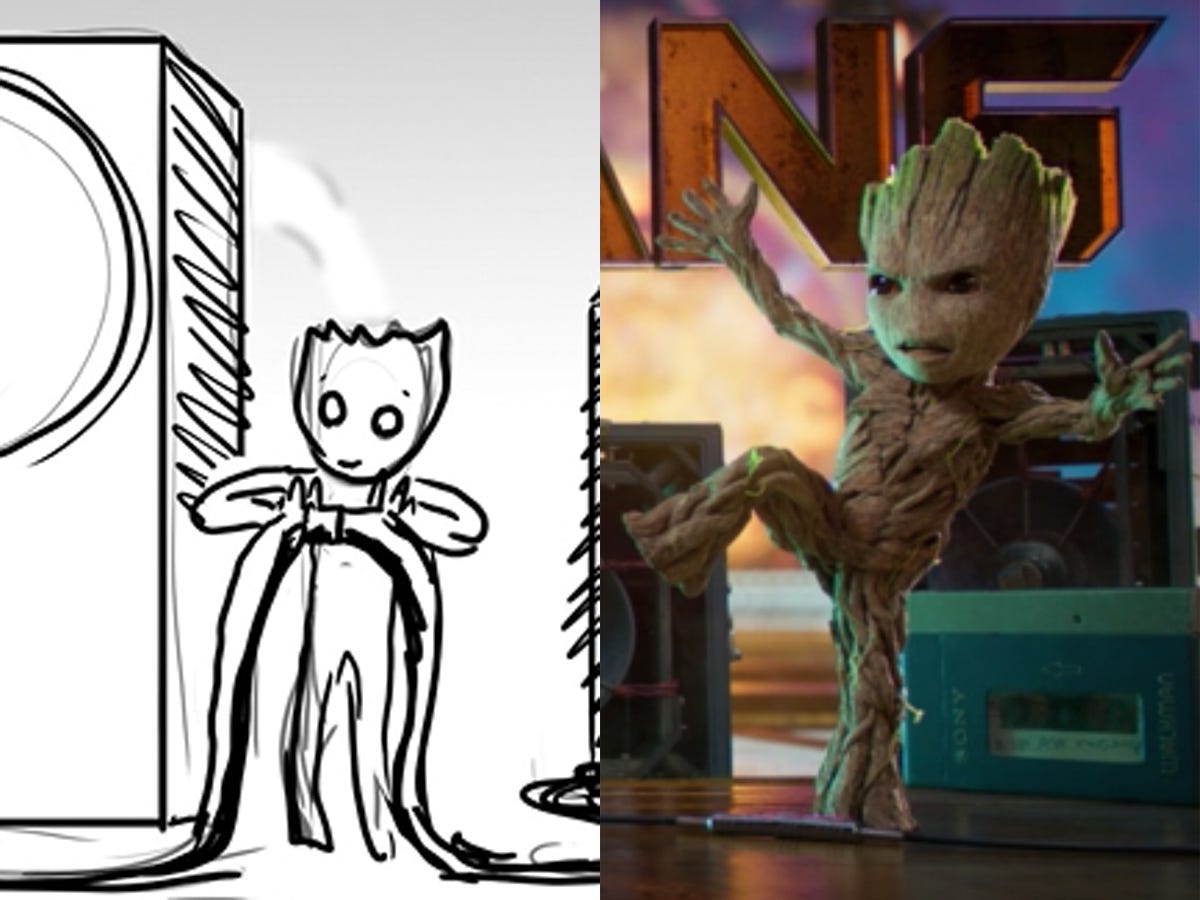 10. See how Baby Groot came to life: The scene-stealing, adorable Groot made waves when he hit the big screens. Now, you can see an early sketch of the storyboard that launched the opening scene for him. The art is featured in the new book "The Story of Marvel Studios." Insider got an exclusive sneak peek at portions of it.

Today's trivia question: Who is the only president buried at the National Cathedral? Email your answer and a suggested question to me at [email protected].