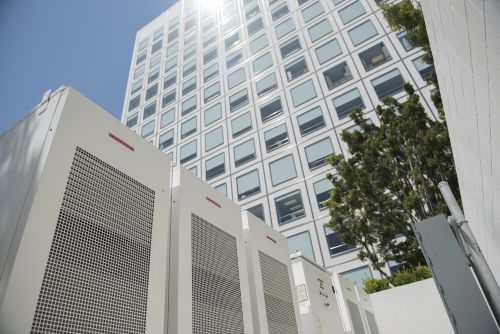 The competition for the title of”world’s largest virtual power plant” has largely been concentrated on residential solar-battery systems, like those being deployed by contenders such as Australia’s AGL or Vermont’s Green Mountain Power.

But according to AMS, previously called Advanced Microgrid Solutions, the world’s biggest VPP is already up and running in the form of the 27-megawatt, 142-megawatt-hour fleet of batteries it’s managing today at industrial and commercial sites across the land of utility Southern California Edison.

On Tuesday, the San Francisco-based startup announced that its own systems, installed as part of SCE’s groundbreaking distributed energy resources procurement in 2014, delivered more than 2 gigawatt-hours of grid services over their first year of operations.

That’s a record-breaking performance for a battery-based VPP, according to Manal Yamout, AMS senior vice president of external affairs — not just concerning the capacity of this project, but in terms of how often it has in fact been called up.

Last week, we covered the unveiling of AMS’ initial 11-megawatt, 60-megawatt-hour fleet of batteries located at 21 buildings owned by California real estate developer Irvine Company, financed and owned by AMS partner Macquarie Capital. This was the first set of installations AMS is developing under its 2014 contract with SCE to deliver 50 megawatts of capacity by 2021, to help the utility meet its grid demands in the aftermath of the closure of the San Onofre nuclear power plant, and the coming closure of once-through-cooled, natural-gas-fired power plants.

Since that time, AMS has expanded its fleet within SCE territory to encompass 27 megawatts and 142 megawatt-hours of energy storage capability at 40 sites, Yamout said. This expanding fleet has delivered in excess of two gigawatt-hours of battery power in response to SCE dispatches, including a 64-day stretch this fall as it was called on daily, she noted — a duty cycle that might be unmatched by any other VPP on the market, “because most don’t get discharged at all. ”

This comment underscores the fact that the majority of VPPs are very much in the pilot project or early development stages, especially those focused on the residential market. Europe is home to the largest of these residential VPPs, such as those run by current Shell acquisition sonnen, while Australia’s AGL and Vermont’s Green Mountain Power are trying to expand their pool of family solar-storage systems.

Behind-the-meter batteries are more cost-effective for industrial and commercial customers in many U.S. markets, such as California, because they can be used to mitigate the demand charges that constitute a significant portion of those customers’ utility bills. That’s the business model behind startup Stem, which also won a 2014 contract with SCE to provide 85 megawatts of local capacity by 2021.

AMS also provides demand-charge benefits to its customers, with an estimated $1 million in cost savings up to now from its SCE systems, Yamout said. But because it’s concentrated primarily on utility and grid services, it’s “overbuilt” its endeavors to ensure they can reliably provide the maximum quantity of grid power called for under their SCE contracts, in addition to provide additional services such as demand-charge direction, she said.

“Our systems are all overbuilt,” she said. While AMS is only contracted to provide 50 megawatts and 200 megawatt-hours of capacity to SCE, it expects the battery fleet to fulfill that contract will grow to 62 megawatts and 352 megawatt-hours at more than 90 sites at the end of the year.  That additional capability “allows us the flexibility to respond to opportunities” that are predicted to emerge as California energy policy grows to benefit from the capacities of energy storage systems, she said.

Beyond Irvine Co., the startup has also installed systems at California State University campuses, and in April 2017 announced plans with Walmart to set up 40 megawatt-hours' worth of jobs at 27 Southern California locations as part of its SCE local capacity requirements contract. AMS is also working with the Irvine Ranch Water District to deliver 34 megawatt-hours of batteries to 11 sites across its Orange County service territory, which shares boundaries with the Irvine Ranch property that is the core of Irvine Co.’s real estate empire.

AMS also had to reconfigure its business model, pivoting from the capital-intensive role of creating projects toward a more pure-play software provider role, to avoid running out of money and to secure a $34 million Series B venture capital around in 2017. Since then, the business has set its sights on allowing energy storage projects in markets outside California, including an early focus on Australia.

In the United States, California remains the clear market leader for behind-the-meter battery opportunities. The primary driver has been its Self-Generation Incentive Program, which has handed out hundreds of millions of dollars to bolster the demand-charge mitigation business case of systems from companies such as Stem, Green Charge Networks, Tesla and other participants.

But large-scale utility contracts remain a significant opportunity for distributed energy storage to compete against utility-scale batteries, mass-market demand response and other options to natural-gas-fired capability to fulfill up with the state’s marginal energy needs.

Apple’s electric car launch could be postponed to ‘2028 or later,’ estimates analyst