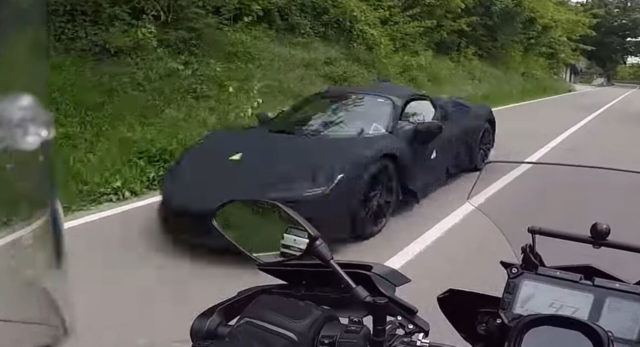 In just a little over a week, Ferrari will uncover their newest hybrid supercar. The yet-to-be-named version will premiere on May 31, and it’s thought to combine a 3.9-liter, twin-turbo V8 engine with no less than three electric motors.

The alleged data comes via AutoMotorUndSport, which claims that the internal combustion engine is the same 3.9-liter V8 units that forces the new F8 Tributo. Two of the electric motors are found on the front axle and the third one is said to have been integrated into the transmission.

The combined output of 1,000 PS (986 hp / 736 kW), as revealed in the invitation to the unveiling of the hybrid supercar that surfaced online last week, and all-wheel drive system are expected to make it quicker than a number of the newest hypercars. The 0 to 100 km/h (0-62 mph) sprint should be completed at a jaw-dropping 2.0 seconds.

If true, then we’re taking a look at the fastest accelerating production car yet, since the Rimac C_Two and new Tesla Roadster aren’t available yet. The former can (allegedly) hit the 60 miles (96 km/h) mark in 1.85 seconds and the latter in (also allegedly) 1.9 seconds.

The official starting price of the new electrified Ferrari is expected to be at approximately €600,000 or nearly $670,000 at the current exchange rates.

A lesser version is supposed to be in development, too, which one will allegedly get up to 733 PS (723 hp / 539 kW) and a more affordable price tag. Judge to SEC and Elon Musk: Put your ‘reasonableness pants on and work this...