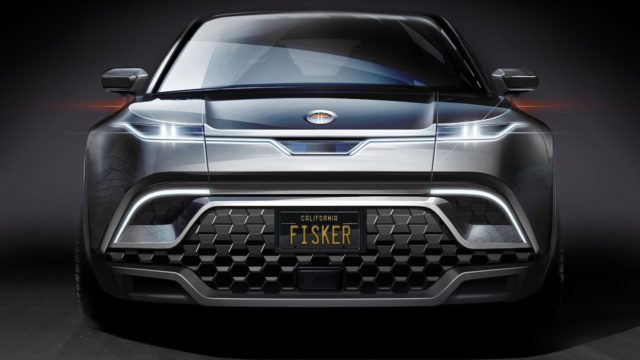 Henrik Fisker may have lost Fisker Karma in bankruptcy, but he hasn’t lost his title or creative juices. Last autumn, the Danish designer told us that he was designing a radical, more affordable Tesla fighter. Today we have our very first look at his latest creation–an all-electric SUV with a standard range near 300-miles which will be priced under $40,000 when it rolls out in the second half of 2021.

Up front the wide SUV sports a high-mounted radar system that’s flanked by sleek LED headlights above curved fog lights below. Fisker promises a spacious interior with a huge heads-up display and a dashboard with an intuitive user friendly interface. We’d be happy if it was Android Auto and Apple CarPlay friendly too.  The sculpted SUV will be provided with all-wheel drive with two electric motors, one in front and one in the rear. Power will be provided by an enhanced 80 kWh lithium-ion battery pack.

The radical new Fisker Inc.. SUV is the first in a planned future lineup of three affordable all-electric vehicles. The California-based firm introduced the Fisker EMotion luxury electric sedan (shown above) at CES in 2018. Fisker says its low-volume flagship model will be introduced to the market after the below $40,000 SUV is available. The EMotion will reportedly use Fisker Solid-State Battery technology, which the company claims, will have the ability to “supply over 500 miles of range with a single, quick charge. ”

More details about the reasonably priced SUV will be revealed closer to the vehicle’s launch, but expect to see a drivable prototype by the end this year. Fisker Inc. will start accepting deposits closer to the beginning of production in a yet to be named facility located in the U.S.

A city in Oklahoma painted its landmark 75-foot statue to look like Elon Musk in a bid for his next factory. Take a look...

Drivers Believe Tesla’s Autopilot Is Safer Than It Really Is