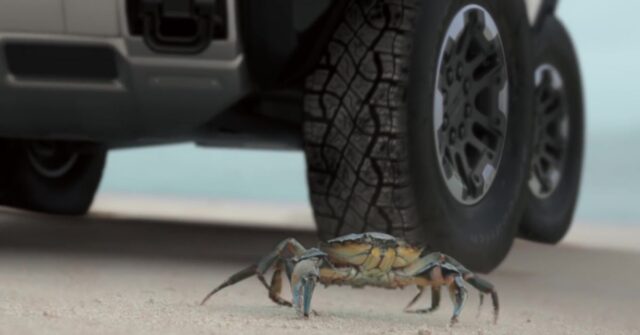 After some delay, GMC has officially confirmed the official debut of the Hummer EV will take place on October 20, 2020, which is the same day that customer reservations will open. Ahead of the truck’s reveal, the company has dropped another teaser showcasing Crab Walk.

Available as an option for the Hummer EV, the mode uses an all-wheel steering system to turn all four wheels in the same direction, allowing it to slowly move diagonally. If you can’t picture it, the brief video has a literal crab moving on a beach to illustrate the function.

This feature should be particularly useful for off-road use, as drivers now have an alternative method of confronting with an obstacle that is overly challenging. It’s also a pretty neat party trick when it comes to parking the vehicle, as engaging it involves a military-style on-screen animation being played on the infotainment screen.

Fancy Crab Walk aside, the video also shows what looks like a double-cab body with all the roof panels removed, including the bed cover. The brief glimpse of the infotainment home screen also confirms features such as Android Auto, Apple CarPlay and trailer mode, among other connectivity, navigation and camera functions.

As a recap, the Hummer EV is said to come with 1,000 hp and a whopping 15,592 Nm of torque in its highest, three-motor configuration, with two- and single-motor options also available. The most powerful setup is said to propel the truck from zero to 100 km/h in around three seconds. When it hits the market, rivals will include Tesla Cybertruck and the Rivian R1T, the latter with its own “tank turn” feature.

No revenue is no problem in the 2020 stk market

In Praise of Fujifilm