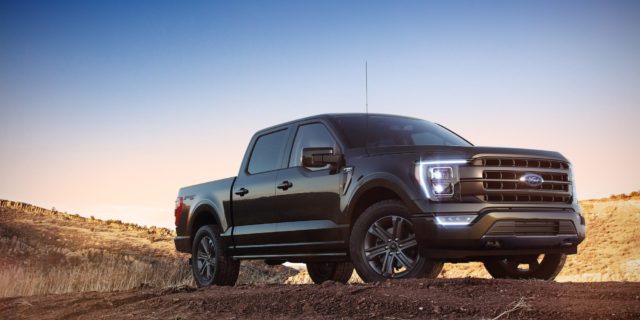 Ford revealed its all-new, 2021 F-150 pickup truck last week, and it’s packed with technology.
The F-150 has been the best-selling vehicle in the US for 43 straight years.
The Tesla Cybertruck was unveiled last year and immediately captivated and polarized opinion with a radical, futuristic design.
The F-150 hits the market later this year, while the Cybertruck won’t start deliveries until late next year.
Ford hasn’t yet detailed pricing, but the top-spec F-150 and the best-equipped Cybertruck should both cost north of $70,000.
Visit Business Insider’s homepage for more stories.

There was already a truck war raging in the US before the Tesla Cybertruck was unveiled last year.

The Ford F-150, the Chevy Silverado, and the RAM 1500 were going head-to-head, with Toyota’s Tundra and Nissan’s Titan also in the picture. The Silverado and RAM 1500 were relatively new, and the 14th generation F-150 was on the way. The Cybertruck won’t launch until late next year, at the earliest. It could signal a brave new all-electric future for pickups. And it could in fact beat the all-electric version of the new F-150 to market by a year.

But for now, the F-150 is headed to market, while wannabe Cybertruck buyers have to content themselves with a $100 deposit to secure a truck.

Here’s how the two trucks stack up, on paper:

Let’s start with the insanely futuristic, all-electric Cybertruck. It’s all-aluminum and it signals a significant departure for Tesla as far as the company’s design approach is concerned. Tesla
Tesla revealed the Cybertruck in late 2019 — and the debut was incredibly controversial. With Tesla’s Full Self-Driving capability installed, the Cybertruck would price from between $47,000 to $77,000. Tesla
See the rest of the story at Business Insider

I flew on the 3rd and 4th-largest US airlines to see how they’re handling the pandemic and the difference was night and dayThe UK just unveiled a snazzy new $1.1 million paint job on its VIP Airbus A330 jet that Brits are calling ‘Boris Force One’The new Ford F-150 isn’t a massive change from the old pickup truck — but it does show how Ford is thinking about the future