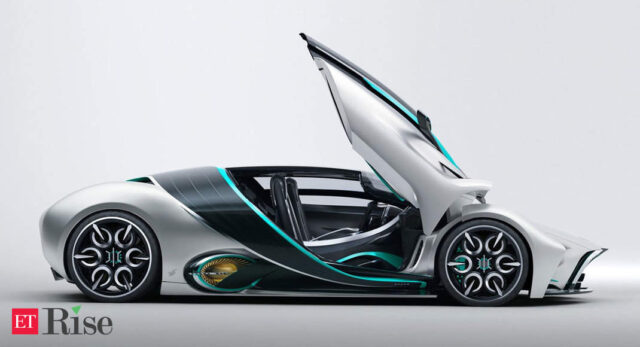 By Kyle StockWith little more than sketches and not fully baked prototypes, a crowd of electric vehicle startups have rounded up billions from investors. Can that fund-raising engine drive a hydrogen-powered car? Hyperion Companies Inc., a decade-old Los Angeles outfit, is entering the race for speculative transportation capital today when it pulls the cover off a supercar that it says will turn oxygen and hydrogen into water and speed. The car will purportedly sprint from a standstill to 60 miles per hour in 2.2 seconds and travel 1,000 miles before running out of fuel. The speedometer will top out around 220 miles per hour.“We’re proposing what the penultimate hydrogen car should be,” said CEO Angelo Kafantaris. “This car is meant to showcase the beauty of hydrogen.”On a highway, hydrogen is cleaner than gasoline and doesn’t require a massive battery and the precious lithium and recycling headaches that go with it. However, producing the fuel is expensive, both in carbon and dollars. Both gas-powered and electric vehicles are cheaper to own and operate, according to a March report from BloombergNEF. And Tesla CEO Elon Musk has dismissed hydrogen vehicles as “mind-bogglingly stupid,” given how difficult it is to make and store the fuel.To date, U.S. residents have only bought about 8,000 hydrogen-powered cars and sales declined last year. There are only three hydrogen models to choose from: the Honda Clarity, Hyundai Nexo and Toyota’s Mirai, all relatively bare-bones sedans that cost about $60,000. Not surprisingly, hydrogen filling stations are hard to come by. There are only 44 in the U.S., almost all in California.There’s little evidence that Hyperion can succeed where Toyota and other auto empires have faltered. Kafantaris, 36, studied automotive design and previously engineered Matchbox cars for Mattel. The company touts at least six rounds of venture capital investment, but won’t disclose how much money it has raised. Production on the XP-1 won’t start until 2022, at the earliest. In the meantime, Hyperion is looking for investors.

Elon Musk backs Mark Cuban’s claim that dogecoin is the best cryptocurrency as a...

The Link Up: A Polaroid Printer Emily Swears By, Caitlin’s Investing Secret & A...

You can now buy a Tesla with Bitcoin, Elon Musk says