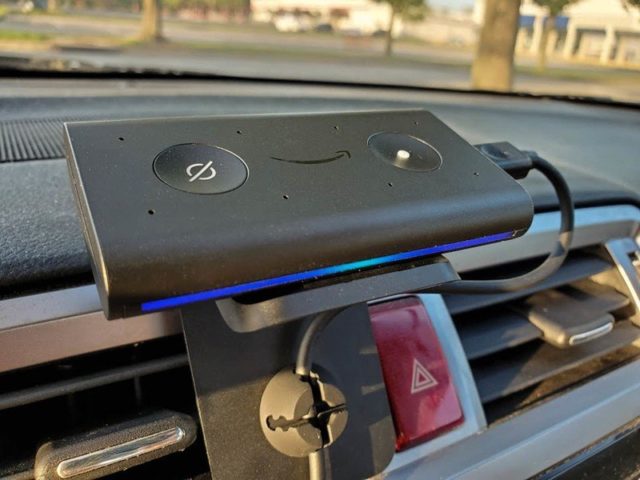 We Have got Android Auto and CarPlay, but not a True Alexa Auto? For many years now I’ve longed for the heads up displays (HUDs) and infotainment systems that I’d see in my rental cars or from my friends’ rides that have built-in Android Auto or Apple CarPlay, and I’ve vowed that my next vehicle will have something like that. However, what I really want is the option to have either of those two great platforms and/or access to my favorite voice assistant, Alexa.

My car is by no means old, but it doesn’t have a real infotainment system, so I currently alternate between an Echo Auto and a Roav Viva. These devices work fine as a voice portal to Alexa, but they’re essentially just operating through Bluetooth (which can be spotty), and their overall functionality is ultimately underwhelming compared to the aforementioned options from Google and Apple. I argued recently for Amazon to dive back into the smartphone game, and I think it also need to dive headfirst into the auto experience. Thankfully, signs from CES 2020 point to that happening sooner rather than later. First, let’s take a look at what is out there right now when it comes to HUDs and infotainment systems. For years auto manufacturers have stubbornly built in their own systems or lightly-customized, generic, off-the-shelf units, leading to largely unsatisfactory experiences. There are some bright spots, such as Tesla and BMW, but for the most part, it’s a mixed bag.

Enter Apple’s CarPlay (2014) and Google’s Android Auto (2015). These systems project a skinned-down version of iOS or Android onto a compatible vehicle’s existing infotainment system for basic touch access to maps and music, and voice access to calling, messaging, and a few more simple, but essential, features. For the most part, the two auto OS’s have been evenly matched, though they often butt heads in terms of feature sets and user satisfaction. There is a great series comparing these two from The Straight Pipes over on YouTube, but for great in-depth coverage, you just can’t go wrong with my colleague Phil Nickinson.

The current state of Alexa in the car

Aside from the lackluster plug-and-play Echo Auto, Roav Viva, and other similar offerings by companies like Garmin, Amazon is actually working on bringing its voice assistant and entertainment platform(s) into the car.

Plug-and-play devices like the Echo Auto ain’t it chief.

The company has had a team working with automakers for years on the Alexa Auto SDK (software development kit), and it currently has partnerships with a number of premium car companies to integrate Alexa into their infotainment systems, including Audi, Ford, Lexus, Lincoln, Seat, and Toyota, and Volkswagen. General Motors has also said that it will be bringing Alexa to the infotainment systems in several of its vehicles (from 2018 and beyond), including Chevrolet, Buick, GMC, and Cadillac. Even more automakers have connected car skills for Alexa to”speak to” and socialize with their own vehicles, such as BMW, Buick, Cadillac, Dodge, and Hyundai.

What is coming in accordance with CES 2020 At CES 2020 we heard about some progress on bringing Amazon’s infotainment answers into the car. Early in the week, we all heard BMW and Fiat Chrysler would be incorporating Fire TV for their forthcoming vehicles (presumably for backseat entertainment) and that Automobili Lamborghini and electrical truck manufacturer Rivian (that Amazon has an investment ) will probably soon be incorporating Alexa into a few of their premium vehicles, despite a few offline capabilities.

Possibly one of the more intriguing Alexa-in-the-car stories to come from CES 2020 has been the capability for customers to request Alexa to cover their petrol at over 11,000 Exxon and Mobil gas stations, as a result of a partnership involving the Alexa team, Amazon Pay, and also Fiserve.

Hope the street down? There are no doubt lots of reasons Alexa is not more popular as an infotainment option (hell, despite their own mindshare, actually Android Auto and Apple CarPlay are not close to becoming omnipresent ). A number of this has to do with all the slow upgrade cycle for vehicles, but more has to do with the several arrangements, contracts, and squabbles involving the firms, providers, and the auto manufacturers themselves.

Ultimately what I’d love to see is more automakers working with the tech giants to create. Believe Amazon’s proposed Voice Interoperability Initiative married with the new Project Connected Home over IP (or CHIP) and repurposed for the car/plane/train, respectively. How cool would this be?

Aside from infotainment and cellular help, one can envision a future in which Alexa moves from their copilot seat and securely into the driver’s seat. Amazon currently owns a stake in Rivian, and people all now know that firms such as Tesla and Waymo, among others, are working on self-driving cars. Could the next step in the Alexa Auto SDK evolution be vehicles? Now, it wouldn’t surprise me whatsoever.

CES 2020: The biggest news and statements so far This will have to do for the time being.

The Echo Auto can’t do nearly as much as a infotainment system such as Android Auto, but it will not allow you to bring Alexa functionality beside you and that’s a start!