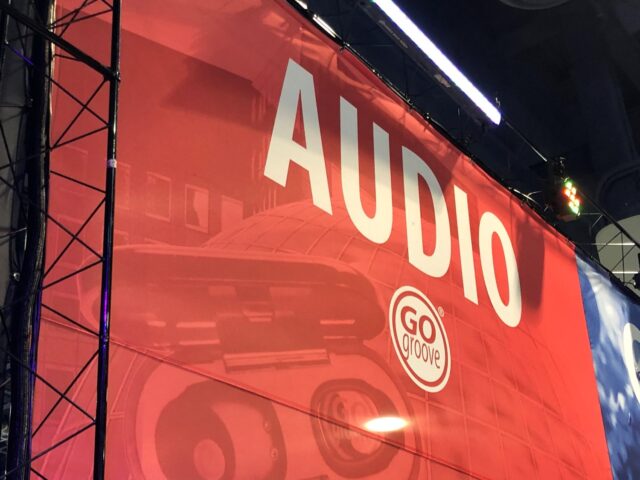 It’s difficult to pinpoint when the current Audio Renaissance began, but seemingly everyone believes it’s for real.

Some think it started with podcasting around 2004, but that medium wallowed for many years before becoming the darling it is today.  It wasn’t until “Serial” captured the media zeitgeist in 2014 that masses of people started buzzing about – and actually started listening to – podcasts.

The advent of “voice” might be another key point in audio’s ascent.  Siri was introduced in the iPhone 4S in 2011, but most people still worked their fingers and the apps of their smartphones.  “Voice” came into its own, starting again in 2014 – the year the Amazon Echo featuring “Alexa” hit the market.

Paul and I couldn’t help but notice that audio became more omnipresent at CES in 2017.  Alexa and Google Assistant started making their appearance in a wide array of gadgets, from TVs to refrigerators to workout equipment.  And everywhere we looked around the Las Vegas Convention Center, we saw “audio” in lots of places.

In 2018, iHeartMedia purchased the How Stuff Works podcasting platform.  And that next year, its CEO, Bob Pittman, was interviewed by NBC News’ Claire Atkinson.

Bob extolled the virtues of radio, of course, but also addressed the broader audio platform, including smart speakers, the Stuff Works acquisition, as well as streaming audio.

“Audio is hot for the first time in decades.”

And soon after, many “radio” companies quietly started modifying their brand names.  The words “media” and “audio” started to show up.

One of the more bombastic name changes involved my alma mater, ABC Radio.  In 2019, they dropped the “R-word,” becoming ABC Audio.

And then last week, Entercom dramatically renamed the company Audacy, while also dropping its much promoted Radio.com streaming platform in favor of the new corporate moniker.  It was a statement move.

Just when you thought the audio moment couldn’t pick up steam, the beta launch of Clubhouse late last year proved to be nothing short of momentous.  It has generated a steady hum around social spoken word – or for short, social audio.

Former Jacobs Media social whiz, Lori Lewis, took a test drive of Clubhouse on this blog back in January.

And that’s jut the beginning of what appears to be a bona fide trend in 2021.

Spotify has acquired Locker Room, which they are modestly referring to as “the future of audio.”  And other variants are springing up, including Mark Cuban’s new creation, Fireside Chat.

Meantime, Twitter, Facebook, and LinkedIn are scrambling to respond with social audio platforms of their own.  Several are “by invitation only,” giving this trend the feel of a social nightclub with a virtual bouncer in front of the entryway.  Not everyone is admitted, and not every talk topic is worthy.

It is truly amazing what has happened in this space in less than six months.

Not surprisingly, broadcast radio execs are having conversations about how they might best utilize these social audio tools.  And their overriding assumption – as always – is that when it comes to audio, no one knows the ropes better than radio pros.  After all, we’ve been the kings of audio since Marconi, Tesla, Casey Kasem, and Wolfman Jack.

But if that were true, broadcasters would be partying in the audio penthouse right now, celebrating the spoils of these new platforms – like podcasting.  But sadly, on-demand radio has not come easily to most radio companies.  Take my word for it.  Our “Broadcasters Meet Podcasters” sessions at Podcast Movement the last few years have been well attended, but radio hasn’t produced the landmark podcast milestones everyone hoped for.

Instead, the biggest radio broadcasters – iHeart and the former Entercom – have had to buy their way into the podcasting market or be forced to step aside and cede the space to more innovative content creators.  (To its credit, Cadence13 says it will create 22 original podcasts this year, so at least some of its content will be homegrown.)

NPR is the only U.S. broadcast radio entity that has elected to “build it” rather than “buy it.”  And what a success they’ve been.  But now, even the public radio overlords find themselves mired in an increasingly competitive landscape.  Podcasting has becoming difficult to dominate because there are so many big money players trying to own the hill, while the marketplace is glutted with more and more content.

And that frequent lament uttered sourly by disillusioned radio executives – “Who knows audio better than we do?”- has fallen on deaf ears.

When it comes to podcasting, smart speakers, and perhaps even social audio, radio broadcasters have pitifully few homegrown successes to crow about.  And yet, the basics of these platform and devices are attributes radio used to routinely provide.

Most podcasts at their core are about telling stories, great interviews, and intriguing dramas.

And social audio is just another form of live talk show where real people can converse with experts, celebrities, and each other.

It’s in many broadcasters’ DNAs to be able to do all these things.  Or at least it used to.

So, the answer may not be in how rapidly radio broadcasters can move into these hot new spaces that are harder and more competitive than they look, but in fact, how they can excel at what got them to the dance in the first place?

Because that may, in fact, be the next chapter in the Audio Renaissance.

A recent NBC News story by Dylan Byers should frustrate anyone who works in broadcast radio, whether they’re in the corner office, the cubicles, or the air studio.   The article’s focus is on Spotify Ceo’s Daniel Ek‘s purchase of Locker Room last year from a company called Betty Labs.  As The Vulture’s headline blared, “Spotify has its Clubhouse now.”

While Spotify’s playlists and podcasts are all on-demand, Byers points out that Locker Room provides the company with an opportunity to evolve into “an enhanced live audio experience for a wider range of creators and fans.”

As Byers explains, Ek is desirous of leveraging Spotify’s stable of proprietary podcasters, like Joe Rogan, Bill Simmons, Michele Obama s well as Prince Harry and Duchess Megan in the live space. The Locker Room app gives these celebrity podcasters the ability to “now broadcast in real time, rather than on delay, while musicians might one day be able to broadcast their concerts or other recording live to listeners.”

Who knew that transforming recorded music and taped interviews into live, in the moment content could be so attractive?

Yes, that live audio experience has been presented with no subscription fees on the AM and later the FM band for a century now.

And so there’s the question:  Does radio have a branding problem?  Or does it have a content problem?

Does the word “radio” symbolize an antiquated entertainment form?  Or is the problem the predictable, tired, and generic product that constitutes “good enough” and “the best we can do” in order to achieve a higher degree of economy and efficiency?

And now, deregulation will be touted as the necessary support mechanism to keep radio broadcasters competitive.  But will the ability to now own more stations in markets big and small be the magical elixir that broadcasters are longing for?  Will it be radio’s salvation or just another tourniquet for an industry that is falling further behind in the audio race?

The answer is not about owning most or all stations in a market, but instead, providing a valuable, desirable experience no one else can offer.  Rather than trying to jump into the hot audio category of the year, shouldn’t radio broadcasters be looking within themselves to produce a better live and local version of what now constitutes radio in 2021? Radio might learn by the misguided example set by Radio Shack.  Founded way back in 1921, the retailer dropped the “R-word” in 2009 to become The Shack in the hope it would contemporize and freshen up their image.

But the problem wasn’t the name – it was their product.  Cluttered, crowded fluorescently lit spaces that had all the charm of hardware stores, mostly staffed by indifferent clerks going through the motions was part of the problem.  In a world of BestBuy and Apple Stores, those weird Radio Shack locations seemed out of sync with the 2000s.

Was the old brand name dated?  Without a doubt.  But the stores themselves and the lack of a modern retail strategy were the culprits that sunk these once-successful electronics marketplaces into bankruptcy.

Maybe there’s a lesson there.  You have to evolve your business plan and question your assumptions because things often change when technology is involved.  What worked in the 1980s is not guaranteed to be successful today.

Should radio broadcasters be rushing into these hot new audio spaces to scarf up the promise of quick and easy profit?  Or should companies of all shapes and sizes be thinking about how to do great radio, providing content and service for a changing marketplace that now demands digital tools for expanding programming, marketing, and sales.

Even with all the audio in our midst, radio broadcasters could own the most precious piece of turf there is – radio.

Despite the neglect, the belt-tightening, and the furniture burning,  broadcast radio has an enviable technical foundation.  And it is still the most listened to of all audio platforms.

But in order to compete in this expanding audio arena, broadcasters  must realign their strategic goals, the products and experiences they deliver, and the way radio is sold and marketed if the medium is to remain viable.

The bar’s been raised.  What is it that radio can own?  What matters to consumers in 2021 as they seek out audio information and entertainment, whether they elect to pay for it or not?

A story in Bloomberg by Lucas Shaw – “A Radio Giant Renames Itself To Chase Podcast Listeners” – tracks the Entercom-Audacy name change, chronicling advertiser shifts away from radio and toward on-demand content.

And then Shaw makes this observation:

“Radio is one of the most popular and least understood media in America.”

Sadly, it is misunderstood by some of the people who have worked in the business for decades.

The great news is that audio is not only on everyone’s radar screen – it is becoming the center of attention during a period where it’s been all about video streaming.

But as we’ve learned from Apple, Spotify, Amazon, Google, SiriusXM, and so many others, the battle for ears is intensifying.  Radio executives must feel like they’re being lapped on a track they built.

And it’s a race radio broadcasters cannot afford to lose.

Thanks to WNSP’s Dave Schultz.

Spec Out Your Ideal 2021 Lucid Air With The Online Configurator