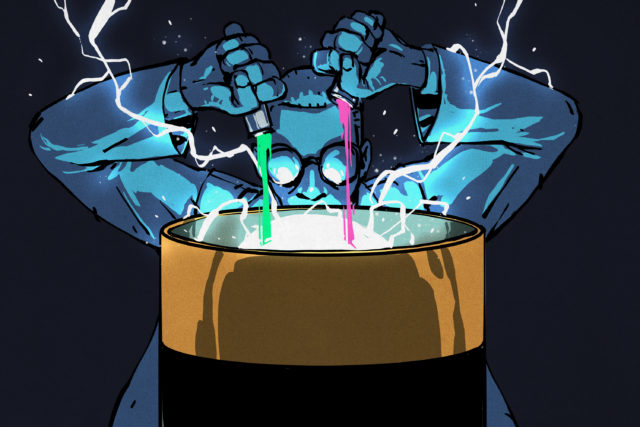 When you think of renewable energy, what comes to mind? We’d venture to guess that wind and solar are probably near the top of the list. And yes, wind and solar are great as long as the winds are favorable and the sun is shining. But what about all those short and bleak winter days? Rainy days? Night time? 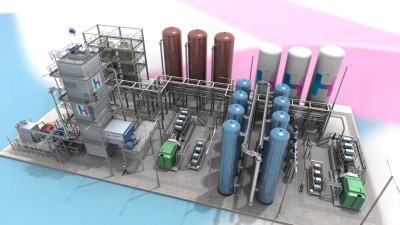 Render of a Highview LAES plant. The air is cleaned, liquefied in the tower, and stored in the white tanks. The blue tanks hold waste cold which is reused in the liquefaction process. Image via Highview Power

Unfavorable conditions mean that storage is an important part of any viable solution that uses renewable energy. Either the energy itself has to be stored, or else the means to produce the energy on demand must be stored.

One possible answer has been right under our noses all along — air. Regular old ambient air can be cooled and compressed into a liquid, stored in tanks, and then reheated to its gaseous state to do work.

This technology is called Cryogenic Energy Storage (CES) or Liquid Air Energy storage (LAES). It’s a fairly new energy scheme that was first developed a decade ago by UK inventor Peter Dearman as a car engine. More recently, the technology has been re-imagined as power grid storage.

UK utility Highview Power have adopted the technology and are putting it to the test all over the world. They have just begun construction on the world’s largest liquid air battery plant, which will use off-peak energy to charge an ambient air liquifier, and then store the liquid air, re-gasifying it as needed to generate power via a turbine. The turbine will only be used to generate electricity during peak usage. By itself, the LAES process is not terribly efficient, but the system offsets this by capturing waste heat and cold from the process and reusing it. The biggest upside is that the only exhaust is plain, breathable air.

A high-level overview of the LAES process. Image via Highview Power

The so-called gigaplant is being built near Manchester, UK and is supposed to be complete by 2022. It will be able to power nearly 200,000 homes for five continuous hours, even if they all switch on their kettles as soon as the credits roll on Coronation Street. This plant will have a 250 MWh storage capacity, which is almost twice that of the Hornsdale Power Reserve — that’s the chemical battery that Tesla stood up in South Australia last year after a particularly chaotic storm took out the grid for nearly 2 million people.

LAES has a lot of positives compared to other renewable energy sources. Some existing green energy schemes have steep storage requirements — pumped hydroelectric power requires a mountain, for instance. Similarly, you can store energy in a pile of gravel, but you need a pretty big pile of gravel. Liquid air plants have a small footprint to begin with, but they’re also modular, so they can be stacked for greater output. They can also be used in conjunction with other components like peaking plants, which only run during periods of high demand.

In light of the recent heatwave in Siberia, it’s great to see large-scale renewable energy projects like this. Highview Power has other projects underway in the UK, Europe, and the US, so maybe we can take a tour someday. While you wait for that write-up, check out the animated walk-through of an LAES plant below.

VC Lior Susan has a big idea that seems to be working: building next-generation...