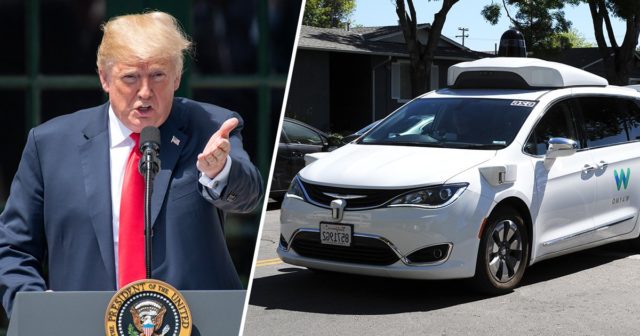 According to a new report, President Trump really dislikes cars that have the ability to drive without human interaction.

His latest perspectives on emerging technologies come less than a week after he launched a bizarre attack on aeroplanes following the crash in Ethiopia that killed all 149 passengers and eight crew members.

Now he’s directed his ire towards driverless cars, presumably because older tech is always better and safer than newer.

Airplanes are becoming far too complex to fly. Pilots are no longer needed, but rather computer scientists from MIT. I see it all the time in many products. Always trying to go one unnecessary step further, when often old and easier is far better. Split second decisions are….

Four sources spoke to Axios about the US President’s open hostility about driverless transport of the future. With American companies like General Motors, Tesla and Waymo leading the way in making the technology a reality, Trump’s comments may come as a surprise.

One of the sources in the report states that Trump acted out scenes with the vehicle veering out of control:

You know when he’s telling a story, and he does the hand moves.

He states, ‘Can you envision, you’re sitting in the back seat and all of a sudden this car is zig-zagging around the corner and you may ’t stop the f—ing thing? ’

He told another source that self-driving cars won’t ever work, coming to the conclusion that the president is ‘definitely an automatic car skeptic’.

Another of the sources told Axios that when one member of his Bedminster Golf Club commented on getting a new Tesla, Trump said that he’s never trust a car that used a computer to push him around.

Trump’s opposition towards self-driving vehicles could make the future very difficult for them to be permitted on American roads. There are currently no federal regulations that allow driverless cars, but US Transportation Secretary Elaine Chao is actively promoting the new technology. According to Curbed, Chao has set up a new regulatory body for speeding up the use of new transportation technologies like self-driving cars and hyperloop tunnels. The new body has been called the Non-Traditional and Emerging Transportation Technology (NETT).

It remains to be seen whether Trump will do everything in his power to prevent driverless vehicles appearing on American roads. But he’s definitely expected to make the regulatory landscape more hostile.

If you have a story you want to inform send it to UNILAD via stories@unilad.co.uk