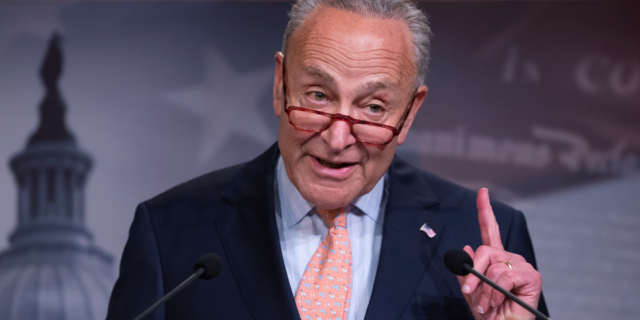 New York Sen. Chuck Schumer has proposed a $454-billion, 10-year plan to take 63 million gas-powered vehicles off America’s roads and eliminate all internal-combustion sales some time after 2030.
The plan has a noble goal, but there are far quicker ways to achieve some of its objectives, without giving away half-a-trillion dollars to compel people to buy vehicles they don’t want and that automakers aren’t sure they can make money on.
Raising the federal gas tax — which hasn’t gone up since 1993 — could achieve similar goals, as could a carbon tax on vehicles at the point of sale.
No political fights or grand visions are needed to address this urgent global-warming problem. We could make both tax-policy changes in short order and begin to see the market-driven effects of more hybrids and EVs on the road.
Visit Business Insider’s homepage for more stories.

New York Sen. Chuck Schumer authored an op-ed in Friday’s New York Times in which he outlined a wildly ambitious and almost completely impractical plan to eliminate internal-combustion engines from America’s roadways by 2040.

The price tag would be $454 billion over 10 years, Schumer estimated.See the rest of the story at Business Insider

NOW WATCH: Most maps of Louisiana aren’t entirely right. Here’s what the state really looks like.

Tesla has always struggled to build cars. Now that critical fundamental is really hurting its business.Banning legitimate vaping is ‘absolute madness’Elizabeth Warren is making a promise that could help Trump win the 2020 election

Tesla Roadster SpaceX Package: What Is It & What’s The Difference?