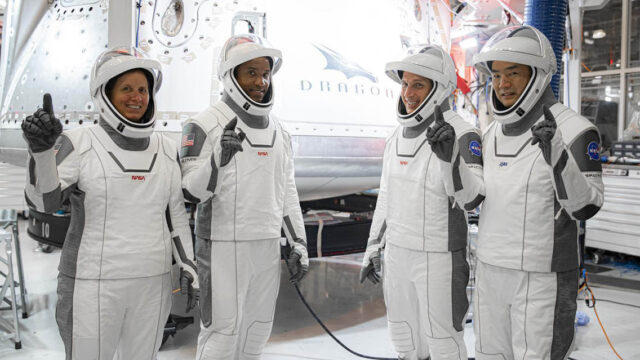 The long-standing tradition of astronauts naming the spacecraft that transports them safely to and from space continues ahead of SpaceX’s next crewed flight to the International Space Station (ISS).

Shortly after safely arriving in low Earth orbit during SpaceX’s Crew Dragon Demo-2 mission to the ISS under NASA’s Commercial Crew Program, NASA astronauts Bob Behnken and Doug Hurley revealed “Endeavour” to be the chosen name of their SpaceX Crew Dragon capsule. Prior to being named by its crew, the capsule had only been referred to by its internal build number, C206. The next Crew Dragon Capsule to visit the ISS, the Crew-1 mission C207 capsule, has been given the same treatment. Until now.

On Tuesday, September 29, during a full day of Crew-1 pre-mission media briefings, NASA astronaut and Commander of the Crew-1 mission, Mike Hopkins, revealed that “the Crew-1 Dragon capsule number 207 will henceforth be known by the call sign: Resilience.”

The Crew-1 Dragon capsule number 207 will henceforth be known by the call sign: Resilience.The Crew-1 astronauts are overjoyed to announce the name of the @SpaceX vehicle ahead of their Oct. 31 launch to the @Space_Station. pic.twitter.com/fZw63d5Enj

Hopkins explained that “I think all of us can agree that 2020 has been a challenging year; global pandemic, economic hardship, civil unrest, isolation. The name Resilience is really an honor of the SpaceX and the NASA teams.” He went on further to explain that the name was also chosen as a nod to all of those that have endured the difficulties, but continued to support the mission, “our families, our colleagues, our fellow citizens, our international partners, our leaders that have all showed those same characteristics through these difficult times.”

What’s in a name?

The naming of crewed spacecraft is a tradition that extends all the way back to NASA’s Mercury program. Alan Shepard, the first American in space in 1961, designated his spacecraft “Freedom 7” before its debut flight.

More notable names arose during NASA’s Apollo era of lunar exploration. With two spacecraft required for the missions to the Moon – a command module and a lunar lander – monikers were needed to distinguish between the two vehicles during radio communication. “Charlie Brown” and “Snoopy” were chosen for the spacecraft of the Apollo 10 mission. The characters of Charles Schultz’s “Peanuts” have since become synonymous with NASA. 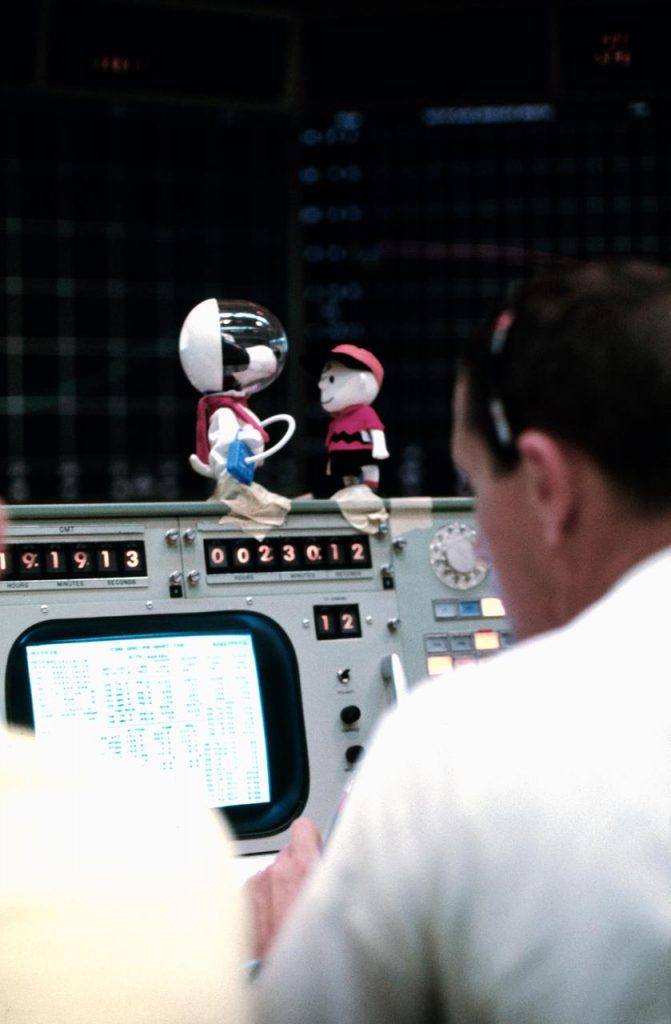 Replicas of Snoopy and Charlie Brown, the two characters from Charles Schulz’s syndicated comic strip, “Peanuts,” decorate the top of a console in the Mission Operations Control Room in the Mission Control Center, Building 30, on the first day of the Apollo 10 lunar orbit mission. (NASA)

In observance of the 50th anniversary of Apollo 10, an inflatable Snoopy balloon dressed in an orange astronaut suit premiered during the 2019 Macy’s Thanksgiving Day Parade in New York. It was a reoccurrence of the astronaut Snoopy balloon that originally debuted in 1969 celebrating Neil Armstrong and Buzz Aldrin’s famous walk on the Moon during NASA’s Apollo 11 mission.

Hurley and Behnken designated “Endeavour” for their dragonship as a way of honoring those before them. Both Behnken and Hurley both flew to the ISS for the first time as NASA astronauts on NASA’s space shuttle Endeavour.

Welcome aboard the @SpaceX Crew Dragon spacecraft! In this video from space, @AstroBehnken and @Astro_Doug reveal the name of their capsule: Endeavour. Take a look inside as the crew continues their journey to the @Space_Station: https://t.co/K9S5mejONx pic.twitter.com/mvH8UhE5FW

After the tragic loss NASA’s space shuttle “Challenger” in 1986, NASA returned to flight with the newly christened space shuttle “Endeavour” in 1992. The name was chosen to fit in-family with the other space shuttle names designated after famous historical ships that set sail to explore the great unknown. Endeavour was named after a British Royal Navy research vessel designated for the lands of Australia and New Zealand in 1768.

The command module of Apollo 15 also shares the name. Commander David Scott once explained that the named “Endeavour” was chosen to recognize the heavy scientific emphasis of the Apollo 15 mission mirroring that of the British Royal Navy research vessel of the same name.

It seemed only fitting that the first crewed vehicle to return humans to the ISS from American soil after an absence of nine years receive the honorary name “Endeavour” as well.

Although the tradition of naming the spacecraft remains, the inspiration for those names has shifted. Dragonship “Resilience” is not the only spacecraft to launch from Earth in 2020 with a name defined by a characteristic. NASA’s Perseverance Mars rover launched earlier this year on its way to the Red Planet. 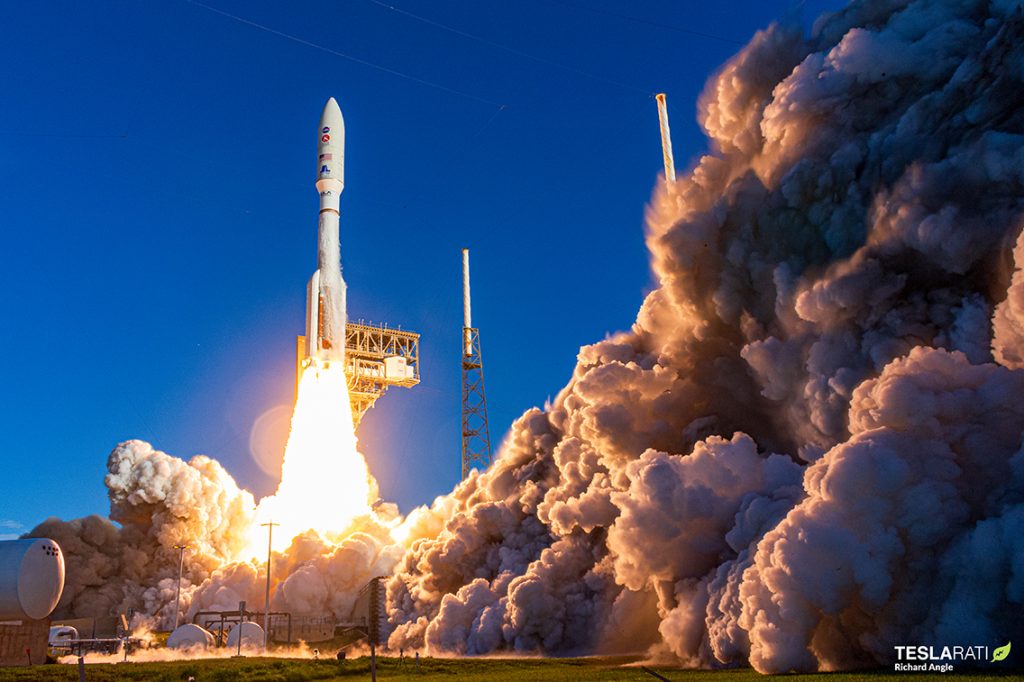 The Mars 2020 rover Perseverance blasts off on the 8-month journey to Mars aboard a United Launch Alliance Atlas V from SLC-41 on July 30, 2020. (Richard Angle)

The name option of Perseverance was submitted, along with 28,000 other essay submissions, to be voted on by the general population. Perseverance was chosen by seventh-grader Alexander Mather. He believed the name fit in-family with the other Mars rovers currently occupying the Red Planet and that it was one of the most important characteristics missing from the line up of other inspirational names such as Sojourner, Spirit, Opportunity, and InSight.

When Mather submitted the name, he believed it to represent a quality possessed by humans. Throughout the year 2020, the definition of the name evolved to represent the wilfulness of human nature to endure and overcome the tumultuous year of 2020. As Mather explained “we, not as a nation, but as humans will not give up. The human race will always persevere into the future.” 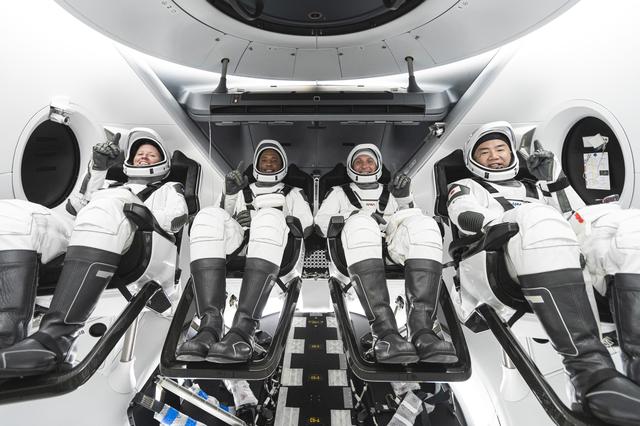 The Crew-1 astronauts are pictured during a test fight of their Resilience Crew Dragon capsule ahead of flight scheduled for Oct. 31, 2020. (SpaceX)

Dragonship “Resilience” is sure to inspire just as many as its many predecessors. “Resilience” will be the very first spacecraft to complete an operational crewed mission to the ISS for NASA’s Commerical Crew Program. It will carry NASA astronauts Mike Hopkins, Victor Glover, and Shannon Walker along with Japan Aerospace Exploration astronaut Sôichi Noguchi to the ISS. Barring any further delays, the Crew-1 “Resilience” Dragon capsule is slated to blast off atop of a SpaceX Falcon 9 at 2:40 am (0640 UTC) from LC-39A at Kennedy Space Center, FL on October 31, 2020.

Tesla Tries, And Fails, To Reinvent The Steering Wheel With Its Yoke

2020 Porsche Taycan Gets Free Software Update, But It Requires Visiting The Dealer