After several weeks of preparations, SpaceX has begun assembling the massive ‘high bay’ it will use to stack and outfit Starship’s massive Super Heavy boosters.

Over the last six or so months, SpaceX has been hard at work expanding and upgrading its Boca Chica, Texas Starship factory, part of which has included building multiple ‘high bays’ (also known as vehicle/vertical assembling builds or VABs). So far, those buildings have been sized explicitly for Starship production and are not even tall enough to allow Starships to be fully integrated, instead serving as bays for Starship tank section assembly.

The VAB SpaceX has been almost exclusively using for the last four or so months is roughly 45m (115 ft) tall, leaving just enough clearance for Starship tank sections to be stacked by an external crane on simple work stands. The Starship VAB is also wide enough for two ships to be simultaneously stacked and outfitted, a capability SpaceX recently took advantage of while building Starships SN4, SN5, and SN6. With a conical nose section installed, Starship alone will measure some 50m (165 ft) from tail to tip – more than 70% as tall as an entire two-stage Falcon 9 or Falcon Heavy rocket. The ship’s Super Heavy booster (first stage), however, is dramatically larger, still, and will need its own similarly-sized production facilities.

Measuring at least 70m (230 ft) tall, Super Heavy boosters will singlehandedly be the same height as an entire Falcon 9 or Heavy rocket – already extremely tall as far as modern orbital-class rockets go. Fully stacked, Starship and Super Heavy will be an incredible 120m (~395 ft) tall – approximately 25% shy of the technical definition of a skyscraper. To build rockets that large, SpaceX will unsurprisingly need to build some unique facilities – especially so given that Starships must be assembled vertically.

While the existing Starship VAB is undoubtedly large enough for SpaceX to begin stacking roughly half of a Super Heavy booster at a time, it would defeat the purpose of having a VAB – shielding the final assembly process from winds and weather. 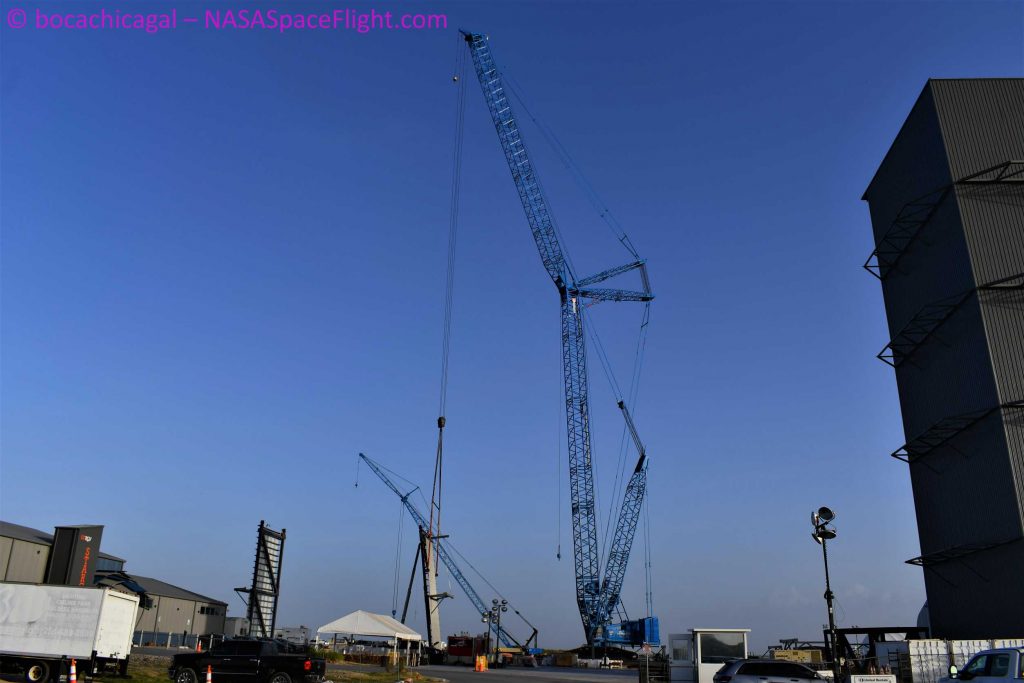 SpaceX has rented a truly massive crane to assemble the Super Heavy VAB – and likely the boosters themselves, down the road. (NASASpaceflight – bocachicagal)

A dedicated Super Heavy VAB was the obvious solution. To build a high bay some 80m (260 ft) tall, though, SpaceX had to rent a commensurately-sized crane, which it has spent the last two or so weeks gradually assembling and checking out. Now, as of July 7th, Super Heavy VAB installation has finally begun. Based on aerial photos and videos taken by LabPadre and RGV Aerial Photography over the last few weeks, SpaceX or its contractor(s) have already assembled at least 12 additional prefab sections of the structure on top of the two now installed.

To complete the new VAB, some 32 of those prefab sections will likely need to be installed, ultimately producing a high bay that is almost identical to the Starship VAB but tall enough to fully stack Super Heavy boosters. Based on Starship’s VAB construction schedule, beginning on January 16th and effectively complete by mid-March, SpaceX could be ready to begin producing the first Super Heavy booster prototypes as early as September or October.