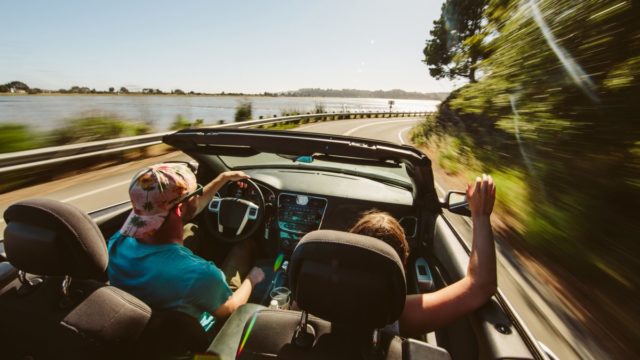 In the United States, roughly 40,000 people die in traffic every year. According to the National Highway Traffic Safety Administration, motor-vehicle speeding killed over 9,000 people in 2018, which means around a quarter of all traffic deaths in this country are speed related. The NHTSA attributes our speeding epidemic to four factors: traffic, running late, anonymity (drivers become detached from their actions while in their automotive cocoons), and disregard for others and for the law. This is all a diplomatic way of saying that people who drive too fast are selfish assholes.

It hasn’t been this dangerous to ride a bicycle on American roads in three decades.

But while it’s easy to blame the douchebag in the BMW who flies by you in the right lane at 97 miles per hour for this national epidemic, the truth is, we’re all a bunch of assholes when we drive. It’s just that what each of us considers speeding is relative. While the legal speed limit on any given stretch of road is generally fixed and unambiguous, there’s also the speed at which most people actually drive on that stretch, which may be well in excess of whatever number is posted on that little white sign.

For practical purposes, here in the U.S., we’re pretty unconcerned with speeding just as long as we’re going the same speed as everyone else and we don’t think we’re going to get caught. No doubt there’s a fancy traffic-engineering term for this phenomenon, but comedian George Carlin articulated our approach to gauging our own speed better than any transportation-policy wonk possibly could: basically, anyone driving slower than you is an idiot, and anyone driving faster than you is a maniac.

If you’re a law-abiding driver, you’ve no doubt been honked at (or worse) by a fellow driver enraged by your insistence on motoring along at a responsible speed. Driving too fast has become so ingrained in our culture that we treat speeding not as a choice made by individual drivers but rather as an immutable force of nature more akin to the ocean currents or the jet stream.

It’s not like we didn’t see this coming. There was a time early in the last century when pedestrians ruled and cities called for speed governors on cars. But the automobile industry successfully flipped that paradigm and instead created the concept of the jaywalker to criminalize the act of walking. Now it’s the vulnerable road users—pedestrians and cyclists—who pay the price for speeding, because it’s much easier to blame the victims who drown in this roiling sea of recklessness than it is to blame the sea itself. Check out this video of an NYPD officer giving a cyclist a ticket: after the cyclist explains that he had to take evasive action to stay alive, the officer justifies ticketing him for his maneuver because, hey, the drivers on the bridge are speeding. (Presumably, it’s easier to stop a single cyclist under the pretense of safety than it is to stem the tide of maniacal motordom by ticketing the drivers.)

In urban bike- and pedestrian-advocacy circles, there’s widespread recognition that we’ve got to curb speeding in order for walking, bicycling, and life in general to flourish. As part of its Vision Zero initiative to eliminate traffic deaths, New York City lowered the citywide speed limit to 25 mph in 2014, thanks in no small part to the efforts of those advocates. In so doing, the New York City Department of Transportation noted that a pedestrian struck by a driver at 25 mph is half as likely to die as a pedestrian struck at 30 mph—which is an astonishing statistic. Short of banning cars altogether, it’s hard to think of a change that would pay more dividends in terms of safety than getting drivers to slow the fuck down. In any sane society, that would be the top priority.

However, among the wider culture—and this includes plenty of cycling enthusiasts—most of us are similarly velocitized. We’re driving to our rides, and we’re doing so in cars that get more powerful every year. Since 1990, average motor-vehicle horsepower has increased by about 70 percent, and the next generation of cars is only going to up the ante—a Tesla Model 3 does zero to 60 in under four seconds, and word is that GM’s electric Hummer is going to have positively stupid levels of horsepower and torque. Moreover, we’re a country with a fairly abysmal road-safety record given our wealth and status as a world leader, and yet our automakers continue to market their products by evoking intimidation and fear. As consumers, we squander money on gratuitous horsepower (can’t buy the model with the base engine, it’s underpowered, dontcha know), and we remain singularly unconcerned with the implications. We may be vaguely aware of the dangers of speeding, but we’re more inclined to gawk at the viral videos than really do anything about it.

It’s tempting to say that autonomous vehicles will fix everything, and that one day algorithms will shepherd us all about without exceeding the speed limit, but don’t hold your breath. A far more pragmatic and readily available solution is automated enforcement; data from New York City’s speed-camera program indicates that drivers do in fact slow down once these devices have been deployed. Nationwide, opponents of this technology love to deride speed cameras as “revenue raisers,” but this only reveals their profound sense of driver entitlement—namely, that how they comport themselves on public roads should be entirely at their discretion. (Plus, New York City’s school-zone speed cameras only pop drivers who are going more than ten mph over the speed limit, which means you’ve really got to be trying in order to get caught.)

Recently the city took its fight against speeding a step further with the Dangerous Vehicle Abatement Law, which will allow it to “seize and impound vehicles with 15 or more school speed camera violations or five or more red light camera violations during a 12-month period unless the registered owner or operator completes a driver accountability course.” (Before the new law, drivers could run up unlimited camera tickets with no consequences, just as long as they paid the $50 fines.) This will potentially allow the city to intervene before these drivers have a chance to maim or kill, and while no doubt someone out there will see this as yet another sign we’re sliding into a Minority Report dystopia, the reality is that speed cameras reveal the egregious degree to which drivers routinely exceed the speed limit. Up until now, we’ve only been finding out that killer drivers are sitting on a mountain of camera tickets after it’s too late to do anything about it.

Meanwhile, in Los Angeles, speed limits are creeping upward as a result of state laws designed to protect drivers from “speed traps.” In Texas, governor Greg Abbott banned speed cameras statewide. He also boasted about it on Twitter, which is a pretty audacious thing to do when you’re the governor of a state where the 2018 traffic fatality rate was almost 13 per 100,000 people. (That’s more than double the rate in New York State the same year, so he has no reason to be smug.)

As cyclists, we should be acutely aware of the dangers of motor-vehicular speeding, and we should all drive accordingly. However, that’s not going to make a dent when there’s a tsunami of traffic behind you and all the drivers are laying on their horns. It’s going to take a massive movement of people who refuse to accept the carnage (such as the Stop de Kindermoord protests in 1970s Holland that led to reforms there, including the widespread adoption of the “Dutch reach”). It’s going to take traffic-calming street design. And, just as crucially, it’s going to take technology. So until we’re ready to smile and say cheese for the speed cameras and cop to our speed addiction, we’re just going to keep spinning our wheels.

Almost 3,000 McLarens Recalled In U.S. Due To Faulty Takata Airbags

Tesla’s big battery in South Australia is about to bring more...

Can The 750 HP Porsche Taycan Turbo S Impress A Pro...