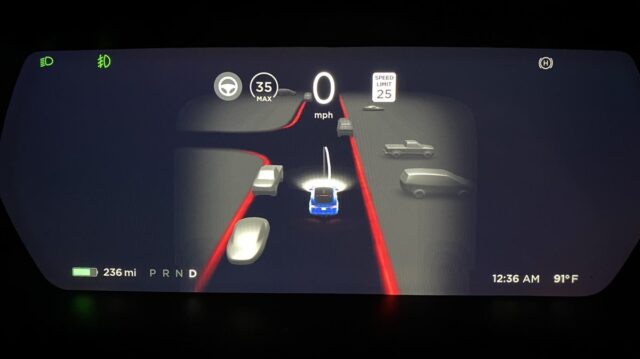 Tesla FSD Beta V9 adopts the company’s pure vision approach, which uses a camera-based Autopilot model. Tesla’s decision to adopt pure vision as opposed to its previous camera+radar approach was quite controversial, though initial reviews from some FSD Beta users have noted that their vehicles have been behaving more confidently with FSD Beta V9. Elon Musk, for his part, has maintained that FSD Beta V9 users must exercise utmost caution when using the system.

Running preproduction software is both work & fun. Beta list was in stasis, as we had many known issues to fix. Beta 9 addresses most known issues, but there will be unknown issues, so please be paranoid.Safety is always top priority at Tesla.

Consumer Reports’ Tesla Model Y does not have FSD Beta V9 software, and thus, the company is yet to experience the advanced driver-assist system firsthand, but Jake Fisher, senior director of CR’s Auto Test Center, noted that videos of FSD Beta V9 in action do not inspire confidence. “Videos of FSD Beta 9 in action don’t show a system that makes driving safer or even less stressful. Consumers are simply paying to be test engineers for developing technology without adequate safety protection,” he said.

Software will be more respectful of pedestrians, cyclists, and skateboarders than human drivers ever could be with even 100 years of public awarenessAdvanced driver assistance systems are a game changer for people who don’t want to use cars. $TSLA @elonmusk pic.twitter.com/bhDytL5lcu

The magazine pointed to videos uploaded by FSD Beta V9 tester AI Addict, whose YouTube uploads showed instances when the advanced driver-assist system made mistakes and required manual interventions. Missy Cummings, an automation expert who is director of the Humans and Autonomy Laboratory at Duke University, noted that FSD Beta V9 still has fundamental problems.

Another drive on FSD Beta 9 with zero disengagements. Nothing special. @elonmusk $TSLA pic.twitter.com/kQgbVtuEH2

“It’s hard to know just by watching these videos what the exact problem is, but just watching the videos it’s clear (that) it’s having an object detection and/or classification problem. I’m not going to rule out that at some point in the future that’s a possible event. But are they there now? No. Are they even close? No,” she said.

WOW!!!! I trusted the car and let it creep on a blind left and do it’s thing – and it was AWESOME! Will still be over-cautious but the new visualizations and creeping behavior are really helping me to trust the car. #FSDBeta #tesla #FSDBeta9 @elonmusk pic.twitter.com/6ng8iwg1Ej

Selika Josiah Talbott, a professor at the American University School of Public Affairs in Washington, D.C., is more critical of the system, stating that the videos she has seen of FSD Beta V9 show that the advanced driver-assist system behaves “almost like a drunk driver” in the way that it struggles to stay between lane lines. “It’s meandering to the left; it’s meandering to the right. While its right-hand turns appear to be fairly solid, the left-hand turns are almost wild,” she said.

Despite Tesla’s rollout of a camera-based driver monitoring system to its vehicles, Fisher argued that the EV maker still needs to monitor its drivers in real-time to ensure that FSD Beta V9 is being used properly. “Tesla just asking people to pay attention isn’t enough—the system needs to make sure people are engaged when the system is operational. We already know that testing developing self-driving systems without adequate driver support can—and will—end in fatalities,” he said.

PERFECT Tesla FSD V9 drive through Capitol Hill in Seattle at 8PM – 0 interventions, there AND back to get my sandwich … this was insane

It should be noted that FSD Beta V9’s current iteration is not in wide release yet, and it has only been rolled out to the company’s select group of FSD Beta testers. So far, however, tests of the system in action seem encouraging. While manual interventions still happen from time to time, FSD Beta V9 does seem like a step forward from its previous iterations. This does not mean that Tesla’s driver-assist system is ready to go hands-free, of course, but it’s a solid step forward. Needless to say, there’s a good chance that improvements would be made to FSD Beta V9 before it gets a wider release.