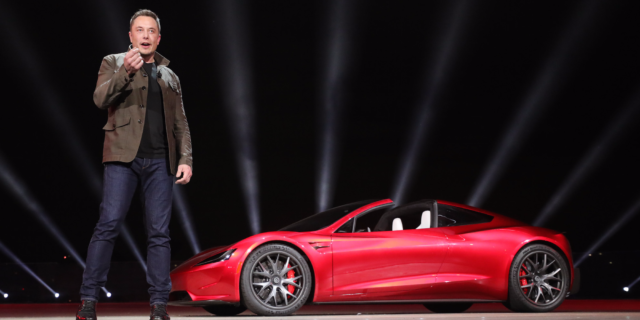 For years, potential competitors kept an eye on Tesla as it absorbed all the risk of creating a viable market for electric vehicles.
While the electric-vehicle market hovers in the single digits, the conventional wisdom was that Tesla would exhaust itself proving that consumers actually wanted to go electric.
But with the EV market now poised to rapidly grow, Tesla finds itself with the most powerful brand, nurtured for more than a decade by charismatic, controversial CEO Elon Musk.
Visit Business Insider’s homepage for more stories.

In the car business, it’s often said that brands are grand, but products pay the bills. In other words, you can capture or retain customers with what your company stands for, but long-term, if you don’t have great vehicles, you’re going to have a problem.

For almost its entire history, more than 15 years, Tesla has inverted that wisdom. A few years ago, the carmaker was barely selling any vehicles relative to its global competitors. Last year, Tesla delivered only about 250,000 vehicles, while General Motors sold almost 8 million.

Investors have decided that this means Tesla should be worth $300 billion in market capitalization, more valuable than GM, Ford, and Fiat Chrysler Automobiles combined — and topping Volkswagen and Toyota, the two biggest automakers on Earth.

Vehicle sales obviously don’t add up to $300 billion in value; Tesla’s quarterly revenue remains far below a Detroit Big Three car company. It’s a bet on the future, and a prediction that Tesla should be able to expand its near-monopoly of the EV market as that market grows from a currently tiny basis, merely 1-2% of worldwide sales.

Investor optimism is that Tesla will maintain a dominant share, increase it scale, and notch enviable profit margins, perhaps more than 10% (high-volume luxury carmakers operate at that level, while mass-market companies run in the single-digit range).

But for now, the Tesla brand is mighty. Here’s how that happened:

The Tesla brand predates its first vehicle. But it was the original Roadster that announced Tesla’s objectives to the world in the mid-2000s. Telsa Motors
The Roadster combined high-performance with a save-the-planet mission. Wikimedia Commons
The previously best-known electric car was the innovative EV1, introduced in the 1990s, but infamously killed by General Motors. General Motors
See the rest of the story at Business Insider

Lincoln is defining the new era of premium American luxury, even if it means killing off one of its most iconic carsBoeing ending production of the 747 means cargo carriers will lose a key feature and be left scrambling when it’s goneThis $700,000 adventure boat can take on rough seas and roll across the beach like a tank — check out Iguana Yachts’ ‘amphibious’ line

Ford reveals 6 custom-modified trucks as part of a collection of 50 vehicles going...