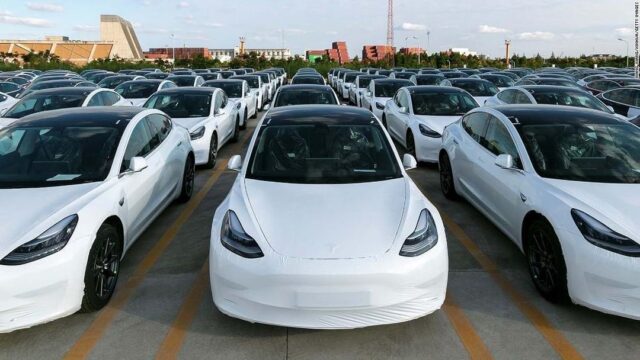 Norway is one of the most heavily-concentrated EV markets in the world, with 54% of all vehicles sold in the country in 2020 being a battery electric vehicle (BEV). With the heavy demand for EVs in the market, Tesla faces stiff competition from European automakers like Volkswagen, Volvo, and Audi, who all hold tremendous sales figures in Norway, which have contributed to the phase-out of gas-powered cars.

In December, the Model 3 was delivered 4,232 times as it dominated its closest competitor, the ID.3 from Volkswagen, with 2,303 units. The ID.3 has been Norway’s top BEV since September 2020. It was considered the country’s new favorite EV, considering it had started to gain some serious ground on the Audi e-Tron, which is the most popular electric car in Norway.

However, the Model 3 quickly put a halt to the ID.3’s momentum in tremendous fashion by having its biggest month since March 2019, the EV Sales Blog reports.

Following the Model 3 and ID.3 were the Volvo XC40 EV, Nissan Leaf, and the Polestar 2, which is owned by Volvo. 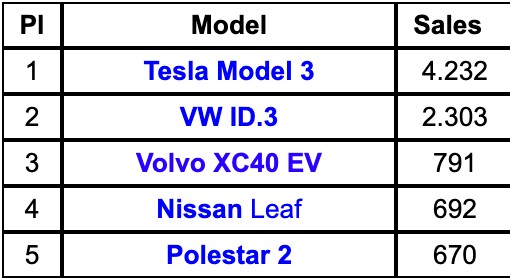 For the year, the Audi e-Tron came out on top with 9,227 units sold for the year following a slow December that only had 454 units make their way to customers. However, the e-Tron holds 7% of the Norwegian market share. Following the Model 3’s dominating December, it moved from sixth to second for the year. Additionally, if Tesla only sold Model 3s in Norway in December, it would have still finished in sixth place by outselling the SAIC MG ZS EV, which sold 3,720 units in Norway in 2020.

Most impressive, however, is Norway’s ability to adopt EVs over the petrol-powered vehicles that dominate the planet’s automotive market share. The Netherlands also boosted EV market share considerably in 2020, and the sales figures seem to incite that the tide is turning in terms of favorable forms of passenger transport. As European countries have adopted petrol phase-out dates that are well into the future, some countries seem to show that their transition will be easier than others as EVs are already being preferred compared to their gas counterparts. 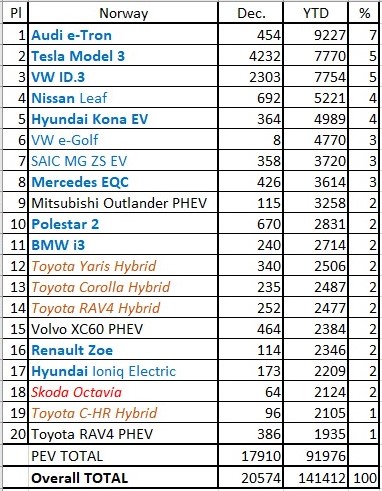 What do you think? Leave a comment down below. Got a tip? Email us at tips@teslarati.com or reach out to me at joey@teslarati.com.

Tesla Cybertruck will spawn the first ‘Terafactory’ in the US