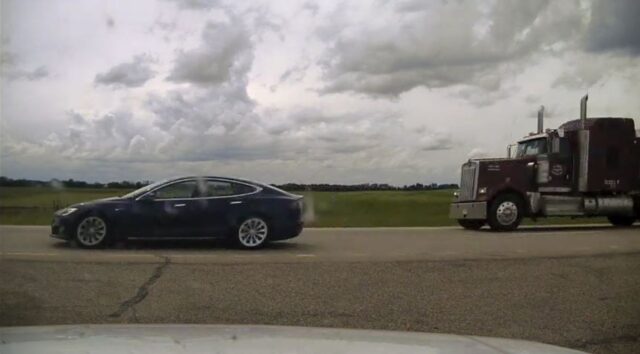 Tesla’s Autopilot is meant to be an assistance feature for alert drivers to both increase their enjoyment of driving and add a layer of vehicle safety. However, stories about irresponsible users come into the news cycle on occasion, this time from a 2019 Model S owner in Alberta, Canada. On Thursday, the Royal Canadian Mounted Police (RCMP) reported the arrest, license suspension, and court summons of a young driver from British Columbia after using his Tesla’s Autopilot while asleep. The all-electric sedan reached over 90 mph before pulling over during the incident which occurred on July 9, 2020.

“Alberta RCMP received a complaint of a car speeding on Hwy 2 near #Ponoka. The car appeared to be self-driving, travelling over 140 km/h with both front seats completely reclined & occupants appeared to be asleep,” the RCMP official Twitter account detailed. “The driver received a Dangerous Driving charge & summons for court.”

Alberta RCMP received a complaint of a car speeding on Hwy 2 near #Ponoka. The car appeared to be self-driving, travelling over 140 km/h with both front seats completely reclined & occupants appeared to be asleep. The driver received a Dangerous Driving charge & summons for court pic.twitter.com/tr0RohJDH1

The Tesla Model S was also said to have automatically sped up from about 87 mph to about 93 mph when approached by the police vehicle. No injuries resulted from the incident.

In a more detailed report on the RCMP website, it was noted that the 20 year-old driver received a 24-hour license suspension for fatigue after being pulled over. Additionally, the driver’s court date is set for December to address the charges. “Although manufacturers of new vehicles have built in safeguards to prevent drivers from taking advantage of the new safety systems in vehicles, those systems are just that — supplemental safety systems,” Superintendent Gary Graham of Alberta RCMP Traffic Services stated in the RCMP report. “They are not self-driving systems, they still come with the responsibility of driving.”

Some replies to the RCMP’s Twitter post suggested that the two Tesla Model S occupants were likely pulling a prank on onlookers and police, but the lack of road awareness during the event is still dangerous regardless of intent. It also explicitly goes against Tesla’s user manual along with frequent and insistent reminders that the feature is not meant to function without human supervision at this time. As any Autopilot user can attest, the vehicles will remind drivers to stay alert and place their hands on the wheel if their presence is not detected for a few seconds, escalating the visual and audible warnings, and ultimately locking the driver out of the feature for the duration of the trip if repeatedly ignored.

Still, the ability to manipulate Tesla’s Autopilot system is taken advantage of despite warnings against such action, and heavy criticism has been levied against the electric carmaker because of it. For instance, last December Democratic U.S. Senator Ed Markey of Massachusetts demanded that the company disable the feature until its ‘flaws’ were remedied.

“Autopilot clearly can’t be allowed to replace drivers on our roads. This tech will continue causing harm until Tesla takes action to fix its flawed system and make sure drivers are paying attention,” Markey wrote on Twitter. “That’s why I sent a letter demanding Tesla take action to protect the public.” His comments were in response to an accident involving a Tesla crashing into a police car. The driver was checking on his dog in the back seat at the time of the collision, according to reports.

For those needing any assistance with understanding the safety precautions required while using Autopilot, or perhaps a bit of a laugh, Teslarati has put something together for the occasion: “The Tesla hitchhiker’s guide to getting the most out of your Autopilot experience.“