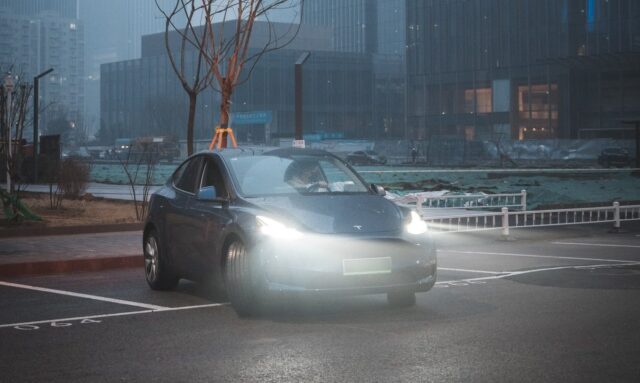 Smith, who has a new 2021 “Tesla Vision” Model Y without any radar hardware, wanted to assess the all-electric crossover’s ability to recognize and avert obstacles on a closed course. Smith said this was the second round of testing, and he used an inflatable clown as the obstacle that his vehicle would have to avoid to consider the test a successful one.

In May, Tesla announced that it would be removing radar from Model 3 and Model Y vehicles that were manufactured in May 2021 and beyond. In an attempt to transition to a camera-based approach for its cars, a plan that Tesla set out many months ago, the automaker chose its two mass-market vehicles as the guinea pigs to accumulate data for future use. The Model S and Model X are keeping radar, but only for a short time. Eventually, both Tesla flagship vehicles will also transition to Tesla Vision.

For now, the Model Y and Model 3 are the only two vehicles that will not utilize any radar hardware for the foreseeable future. Many owners who have utilized Tesla’s Autopilot of Full Self-Driving suites for semi-autonomous driving capabilities grew concerned when the automaker announced it would be ridding vehicles of any radar, with the most common complaint being performance in severe or low-visibility weather. Instead, Tesla believes that a vision-based approach will actually make the vehicle’s performance much more robust and accurate, comparing the vision-driven system to that of a human driver.

CEO Elon Musk commented on it during the Q1 2021 Earnings Call:

“…when your vision works, it works better than the best human because it’s like having eight cameras, it’s like having eyes in the back of your head, beside your head and has three eyes of different focal distances looking forward. This is — and processing it at a speed that is superhuman. There’s no question in my mind that with a pure vision solution, we can make a car that is dramatically safer than the average person.”

In Smith’s stress test, it proves that Tesla’s camera-based approach definitely needed some work early on. As a result, Tesla launched Software Update 2021.4.18.1, improving the performance of Autopilot for Vision-based automobiles. The vehicle successfully stopped while operating on Autopilot based on multiple test runs with the inflatable barrier. However, the manual test, where Smith controlled the car and depended on FCW and AEB to stop the car automatically, wasn’t as successful. All manual runs activated FCW, but AEB only interfered a handful of times. The vehicle didn’t stop, either. It only slowed down, softening the blow and unfortunately deflating Smith’s blow-up clowns.

Other owners have indicated that Autopilot’s performance with Tesla Vision has led to more confident showings of Autopilot compared to other vehicles that equip both cameras and radar. Tesla also added several safety features and new additions to vision-only vehicles. Teslas will only become more confident as the Neural Net compiles more data from Tesla Vision cars as they become more popular in the coming months.

Check out Kevin Smith’s video below, and let us know what you think in the comments!

The post Tesla Model Y without radar gets the ultimate Forward Collision and Auto-Braking stress test appeared first on TESLARATI.

Tesla courted with $1 Billion incentive for Cybertruck Gigafactory in Missouri