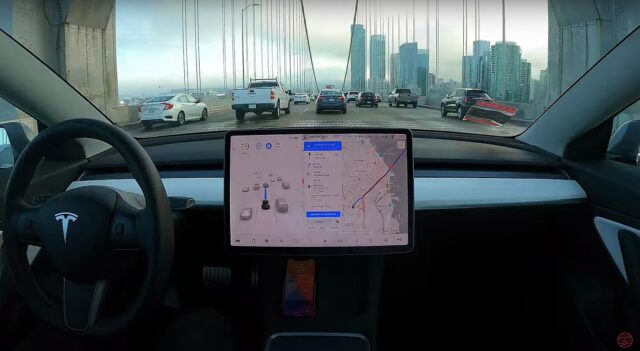 Tesla’s FSD Beta 9.1 software recently accomplished another milestone. Without using radar data, the advanced driver-assist system was able to complete a trip from Los Angeles to the San Francisco border with zero disengagements. This shows that Tesla’s bold shift to a pure vision approach may indeed be the right strategy to achieve autonomous driving.

Tesla Model 3 owner and FSD Beta tester Whole Mars Catalog recently posted a video of the ~380-mile trip on YouTube. The journey started from a Tesla Supercharger near the SpaceX headquarters in Los Angeles to San Francisco. Due to the length of the trip, the Model 3 had to stop at the Kettleman Supercharger to recharge its batteries. After its brief charging session, FSD Beta 9.1 proceeded to head over to San Francisco.

Pure Vision Autopilot + FSD Beta 9.1 Drives from Los Angeles to San Francisco with 0 disengagements There was 1 disengagement after getting to SF but it may or may not have been needed Slower on YouTube: https://t.co/31C80PfDTV$TSLA @elonmusk pic.twitter.com/Uy7Lj5GfyN

The trip was quite uneventful, and that’s precisely what made the trip so remarkable. While the video was sped up, it was evident that FSD Beta 9.1 behaved very much like a human driver during the journey, weaving in and out of traffic and safely navigating through inner-city streets. Highway driving seemed refined as well, with FSD Beta 9.1 traveling at a comfortable speed over long stretches of road.

FSD Beta 9.1’s trip from Los Angeles to San Francisco was very similar to a feat achieved by a Model 3 with radar+camera earlier this year, which involved a trip from SF to LA. Similar to that trip, however, the pure vision Model 3’s entire trip still required some manual driving, particularly when the driver pulled up to a stall at the Kettleman Supercharger. The driver also opted to manually take over for a left turn well after the Model 3 crossed the San Francisco border.

Tesla’s approach to autonomy is quite different than those being pursued by other companies and automakers that are also developing self-driving software. Instead of using numerous sensors and pre-mapped data, FSD Beta uses AI and camera feeds to enable Teslas to navigate through roads, similar to a human driver. This is much more difficult than pre-mapping a freeway or a specific geofenced area, but it should allow the system to operate practically anywhere in the world.

This was one of the reasons why the shift to a pure vision approach was deemed controversial even by some of Tesla’s most ardent fans. But based on the performance of FSD Beta 9.1 so far, and considering feats like the Whole Mars Catalog team’s Los Angeles to San Francisco drive, it appears that the company’s decision to pursue autonomy with a pure vision approach may bear fruit in the long run.

Watch FSD Beta 9.1 complete a drive from Los Angeles to the San Francisco border with zero disengagements in the video below.