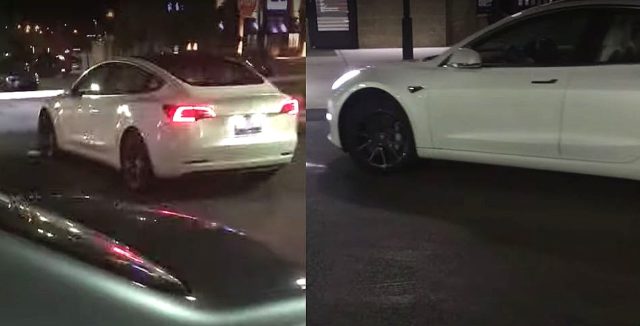 Tesla’s recently released Smart Summon feature for its Full Self-Driving suite recently received what could only be described as the perfect reaction video. The short clip provides an encouraging glimpse at how enthusiastic the general public is, or could be at least, for the advent of driverless vehicle technology.

Tesla Model 3 owner Omar (last name not given) was using his Model 3’s Smart Summon feature in a parking lot when the vehicle was spotted by a passerby. The stranger, who was not named by the Tesla owner, realized that the all-electric sedan was moving without a driver behind the wheel; and just like anyone living in the smartphone age, he starting filming the experience.

The passerby’s reaction to the Model 3’s Smart Summon feature was one of genuine amazement. For almost a minute, the stranger filmed the Model 3 as it navigated the parking lot on its own. The man seemed incredibly excited about the feature, remarking in wonder at the fact that there was “no human in the car.” Particularly interesting was the fact that the man seemed to be unfamiliar with Tesla, its vehicles, or its technologies prior to his encounter.

And this is where the recently shared reaction video truly shines. It showed someone who is out of the loop with all the drama or negative narrative surrounding Tesla reacting to a Full Self-Driving feature in a truly genuine manner. Prior to the release of Smart Summon, Elon Musk noted that Smart Summon is pretty mind-blowing to see in action. The man’s reaction shows that this is indeed true.

As noted by Omar, he and the stranger ended up talking about Tesla, the Model 3, and its capabilities after he introduced himself as the owner of the electric car. The final moments of the stranger’s reaction video suggest that he had a ton of questions after. Following their conversation, the man graciously sent over his epic reaction video to the Tesla owner.

Smart Summon is impressive, though the newly-introduced feature remains polarizing for now. Tesla owners have shared numerous demonstrations of the feature working well in parking lots, but at the same time, organizations such as Consumer Reports have taken a rather dismissive stance on Smart Summon, stating that the feature’s movements are slow and does not offer many benefits to vehicle owners.

Yet, if there is something that could be seen in this recently-released video, it is that Smart Summon, at its core, is something that can strike wonder to those who are sharp enough to acknowledge its potential. It is, in a way, proving that Elon Musk’s vision of a future populated by full self-driving vehicles is indeed coming, perhaps even sooner than expected.

Watch Tesla Smart Summon’s best reaction video to date in the video below.

The post Tesla Smart Summon gets epic reaction video: ‘There’s no human inside that car!’ appeared first on TESLARATI.

Relativity is building a 3D-printing rocket manufacturing hub in Mississippi