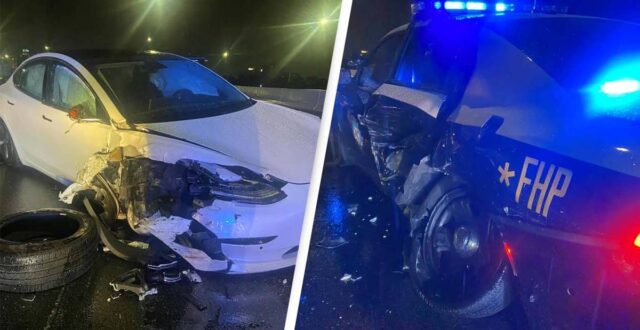 A Tesla that had been on partial autopilot smashed into a police car in Florida.

The incident occurred shortly before 5.00am on Saturday, August 28, on an interstate close to Orlando, after an officer stopped to help with a breakdown.

The officer, who had activated his vehicle’s emergency lights, was reportedly nearly struck by the Tesla as it collided into his car as well as the car he was attending to. Highway patrol spokeswoman Lt. Kim Montes told The Orlando Sentinel the trooper had been walking towards the broken down vehicle when the Tesla smashed into the left hand side of the cruiser, before colliding with the other vehicle.

The 27-year-old Tesla driver and the driver of the broken down vehicle sustained minor injuries while the trooper was thankfully unhurt, AP News reports.

In a tweet, the Florida Highway Patrol said that the unnamed trooper had been ‘extremely lucky to have not been struck’ by the Tesla.

Happening now: Orange County. Trooper stopped to help a disabled motorist on I-4. When Tesla driving on “auto” mode struck the patrol car. Trooper was outside of car and extremely lucky to have not been struck. #moveover. WB lanes of I-4 remain block as scene is being cleared. pic.twitter.com/w9N7cE4bAR

Earlier this month, the US government launched an official investigation into Tesla’s Autopilot driving system following a series of other collisions with parked emergency vehicles.

The National Highway Traffic Safety Administration opened an investigation into Tesla vehicles after counting 11 collisions since 2018 where Teslas, which had either been on autopilot or cruise control struck vehicles which had been using flashing lights, flares, an illuminated arrow board or cones.

A total of 17 people were injured in these crashes, and one person died. An investigation may result in a recall or another enforcement action.

King of the Sky!