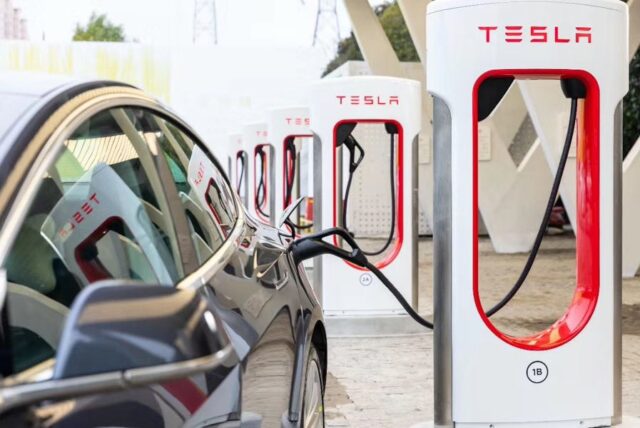 Tesla (NASDAQ: TSLA) stock spiked nearly 3% this morning after positive news from China that effectively debunked rumors of declining sales figures in May. However, the increase in price was short-lived, as the stock dropped back down to the $600 level after opening at $623.01, despite no negative news being reported regarding Tesla this morning.

Earlier today, the Chinese Passenger Car Association (CPCA) reported Tesla delivered a total of 33,463 vehicles in May. Tesla delivered 21,936 domestically after being produced at Tesla’s Giga Shanghai production facility. The remaining 11,527 were exported to other areas, including Europe, where Tesla started shipping vehicles from China in January.

The figures released by the CPCA earlier today directly contradict reports from earlier this month, when The Information stated that an internal source familiar with Tesla’s EV sales in China indicated the electric automaker’s orders had slumped significantly in May compared to April. The figures indicated Tesla had only 9,800 orders in May, suggesting a decrease by as much as 50%. The news sent Tesla stock on a steep decline after the report hit mainstream media, who started to aggregate the story as fact.

The report was met with criticism just a few days later by the CPCA’s Secretary General Cui Dongshu, who said (via Global Times):

“Placed orders cannot equal the sales number in one month. Usually, monthly sales are accumulated units of orders over previous months, so the immediate results in May might not truly reflect whether the recently reported accidents have had any real impact on Tesla’s sales.”

Cui suggested that if Tesla were experiencing decreasing order and sales figures, they wouldn’t be identifiable until July or August.

After Tesla shares spiked this morning on the news of the positive delivery figures in China, the surge cooled down. Analyst Gary Black attributed the drop off to two things: Traders buying on the rumor of low delivery figures, and now selling after shares rose when the CPCA released positive news this morning, or the possibility of Bitcoin’s plummet affecting Tesla’s shares.

There is a chance that Jerome Guillen, Tesla’s now-former Head of Heavy Trucking, leaving the company could be affecting the price.

Tesla has had somewhat of a tumultuous relationship in China over the past few months. After growing concerns of security issues due to Tesla’s external cameras, several State-owned businesses and entities banned the company’s cars on their premises in fear of a security breach that could take pictures of potentially sensitive information. Tesla stated that its cabin cameras are not active, and Elon Musk stated that Tesla’s vehicles were not being used to spy on Chinese entities. “If Tesla used cars to spy in China or anywhere, we would get shut down,” Musk said.

In the following months, Tesla would battle numerous reports of brake failures by numerous owners in China. The most public occurrence of this happening was at the Shanghai Auto Show, where a Model 3 owner claimed her brakes failed and led to an accident. Tesla offered to have a third-party company complete testing on the car to determine the cause of the accident. The owner declined this.

Other owners in China have also come out with similar claims, all of them eventually being debunked or disproven in the following days or weeks. In response to the claims, Tesla created a “Special Handling Team” in China to deter and navigate through false narratives related to the company’s products. Tesla said the team would “meet the demands of car owners and strive to satisfy car owners while complying with laws and regulations.”

Tesla shares have dropped 14.49% so far in 2021. Interestingly, Tesla has continued its trend of strong financials and delivery and production performances, citing Quarter-over-Quarter growth in both of the company’s Earnings Calls that have taken place this year. In addition, Q1 2021 proved to be Tesla’s biggest quarter yet in terms of production and delivery figures, despite only manufacturing two of its four currently-offered automobiles. The Model S and Model X lines at Tesla’s Fremont production facility were being retooled during the end of 2020 and the beginning of 2021 as the flagship models were being “refreshed.”

The post Tesla stock spikes on China delivery figures, then cools down for no reason appeared first on TESLARATI.

The Year of the ‘Giga Press’: How Tesla’s monster machines can complete Elon Musk’s...

The Perils Of Not Articulating A Clear Vision