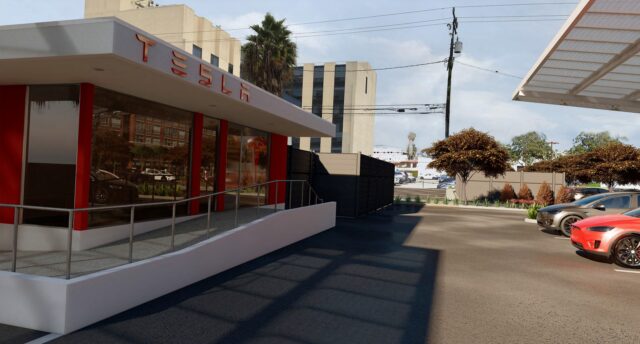 Tesla’s massive Supercharger facility in Santa Monica, California, has been visualized in new renders, giving plenty of indication of what is to come to what is arguably the automaker’s most highly-anticipated charging facility to date. While the new graphics give a look into the future with V3 charging stalls giving Teslas additional range, the photos also show the restroom facility that will be available to those who will utilize the 62-stall facility in the heart of Los Angeles’ beach town, the rumors of a restaurant and movie screen seem lofty, especially as real estate for the lofty design seems to be minimal, and the new renders didn’t include any visualizations of the planned 50’s diner.

Since early 2021, Teslarati has been closely following the situation in Santa Monica. Initially, there was a lot of speculation of what was to come after a 2018 announcement from Elon Musk, CEO of Tesla, who said that a drive-in movie theater with a roller rink was coming to Santa Monica, giving Tesla owners one of the most unique Supercharging experiences yet. The project finally took off after Tesla gained preliminary approval to build 62 of its fastest EV chargers across two vacant lots, located at 1401 and 1421-1425 Santa Monica Boulevard.

The lot was at one time home to Steve Taub Porsche-Audi, but this dealership closed down. For a couple of years, the lots were used to sell seasonal items like Christmas trees and Pumpkins for Halloween. That is until Tesla submitted their 2018 plans for a restaurant and drive-in movie theater. However, it would not be until 2021 that Tesla finally started making some progress with the site.

After preliminary plans were approved and put into place, Tesla had a full-scale blueprint of what the facility would look like. Ultimately, the 62-stalls would be complemented with a restroom facility, Cybertruck-designed spots, and solar canopies that would provide the V3 chargers with power. The additional energy would be stored in a Tesla Megapack, just like many of its other large-scale commercial projects that require energy storage.

The project took a short-term detour as Santa Monica City Council members decided that the site could be more beneficially utilized as housing. This was a short-lived derailment of the Tesla project, and Santa Monica’s council members chose to let Tesla have their project.

The new renders obtained by Teslarati via the GPD Group, the developer responsible for the project, show plenty of before and after angles of what will eventually be known as the Santa Monica Supercharger. 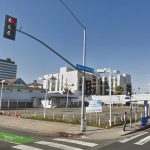 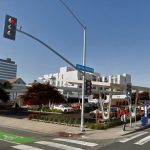 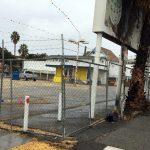 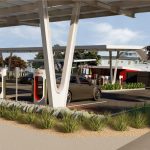 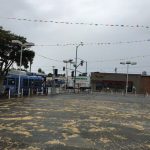 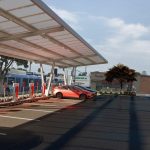 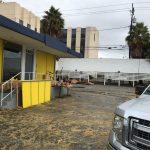 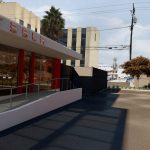 The renders above are for the first lot, located at 1401 Santa Monica Boulevard. This lot will be home to 36 of the 62 V3 chargers. Along with the chargers, the indoor restroom facility will be located on this lot. The GPD Group renders show that the company will transition an already-standing building on the lot into the restroom building. The solar canopies will also be installed on this lot, as it is the location of a majority of the Supercharging stalls.

The remaining 26 V3 Superchargers will be located on the lot at 1421-1425 Santa Monica Boulevard. The spaces in this lot are of varying widths and lengths, hinting toward Cybertruck-specific charging stalls as the automaker prepares for production of the all-electric pickup later this year. 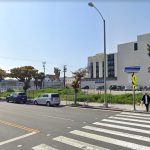 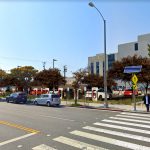 Now, unfortunately, there are no renders, images, or even hints that Tesla’s 50’s-style diner will even be at this location. Based on the images and previously published blueprints of the plans for the 62-stall Supercharger facility on Santa Monica Blvd., there isn’t much space for one, either. However, there are plenty of indications that Tesla has not included this in any plans, blueprints, or images as of yet. In fact, there is a strong possibility that the company will be submitting these soon, as there is a six-month revision period that Tesla can utilize that will expire in early September, according to documents.

Tesla is officially planning to enter the restaurant business

The documents that the Santa Monica City Council has released seem to suggest that there will be a restaurant on the premises, however. According to the subheading “Construction Plan Requirements,” Tesla will be required to oblige by sanitation and food safety requirements if it ultimately decides to build a restaurant at the facility, of course. It looks like it will be a relatively intimate space, as the documents state that there will likely be less than 50 seats on the interior of the restaurant. This makes sense, however, as there are only 62 stalls, to begin with, drivers and passengers will likely want to eat their food in their own car, and the planned 100 greatest movie clips of all-time that Musk has hinted toward will likely be projected on an outdoor screen or displayed through each vehicle’s individual center screen.

Currently, several things are going on at the two vacant lots. First, the project will be subjected to a “Pending Design Review” next Monday, July 19th, at 7 PM PST. There are opportunities for members of the public to livestream or dial into the event. It is unknown what the call will actually provide, but it appears that the final steps could be finalized before construction can begin. 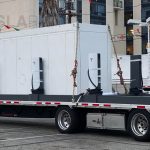 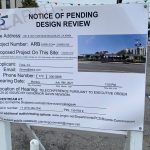 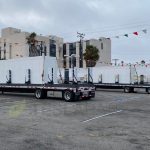 Tesla previously used prefabricated Superchargers at a site in Beaver, Utah. However, these Superchargers were not permanent, and they were utilized to likely charge vehicles that had arrived on site for unknown reasons. As you can see, they are identical to the Superchargers seen here.

For now, the Santa Monica Supercharger project remains in the hands of the City Council Members. However, next week, there should be more answers, as the call will likely allow Tesla to move forward with this highly-anticipated project.