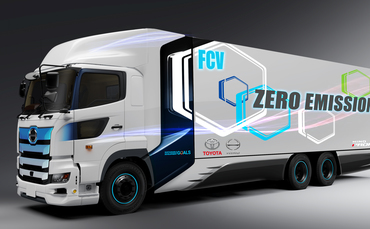 The race may be on to accelerate the roll out of battery powered electric trucks, with challengers such as Tesla and Arrival battling with established brands such as Volvo and Mercedes-Benz, but work is also underway to ensure fuel cell trucks are not left in the slipstream of the emerging electric truck market.

As such, this week Toyota announced it was teaming up with its truck and bus focused subsidiary Hino Motors Ltd to jointly develop a heavy-duty fuel cell truck and conduct testing on the new model.

The fuel cell truck currently under design is based on Hino’s Profia brand and will draw on Toyota’s existing fuel cell car technologies, which feature in its Mirai model.

The Japanese giants said the chassis for the new truck has been specially designed, boasting the “optimum packaging for a fuel cell vehicle”, while steps are also being taken to ensure a sufficient load capacity for customers.

The powertrain is to be equipped with two Toyota fuel cell stacks that have been newly developed for the next generation Mirai and include “elements of vehicle driving control applied through heavy-duty hybrid vehicle technologies developed by Hino”.

Cruising range will be set at approximately 370 miles, providing operators with significant range between fuelling stops.

Toyota has been a long-standing advocate of fuel cell vehicles, arguing that it provides a closer like-for-like replacement for carbon-based fuels that gives drivers significant range and a rapid re-fuelling experience.

Supporters of hydrogen argue that the fuel could be particularly well-suited for HGVs.

“In order to achieve broader reductions in CO2 emissions, major improvements will be required in the environmental performance of heavy-duty trucks, which account for about 60 per cent of the total CO2 emissions from commercial vehicles operating in Toyota and Hino’s home market of Japan,” Toyota said in a statement.

“For the electrification of commercial vehicles, the optimum powertrain must be adopted to ensure both environmental performance and practicality as a business vehicle, in terms of cruising range, load capacity and other commercially relevant aspects of operation. Heavy-duty trucks are typically used for inter-city transportation. Therefore, they are required to have sufficient cruising range and load capacity as well as fast refuelling capability. For this reason, fuel cell vehicles that run on hydrogen, with its high energy density, are considered effective.”

However, supporters of battery electric vehicles maintain that rapid improvements in battery performance and range mean that it is possible to develop plug-in HGVs that could ultimately enjoy lower running costs than hydrogen alternatives.

Lightyear One EV Can Run On The Power Of The Sun

Apple Car will reportedly be a fully autonomous electric vehicle