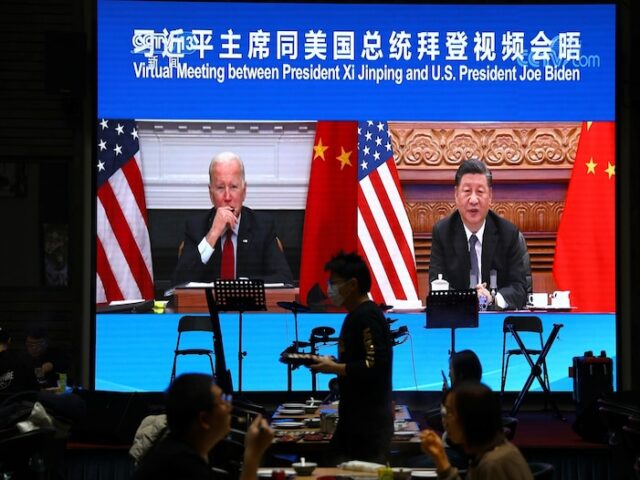 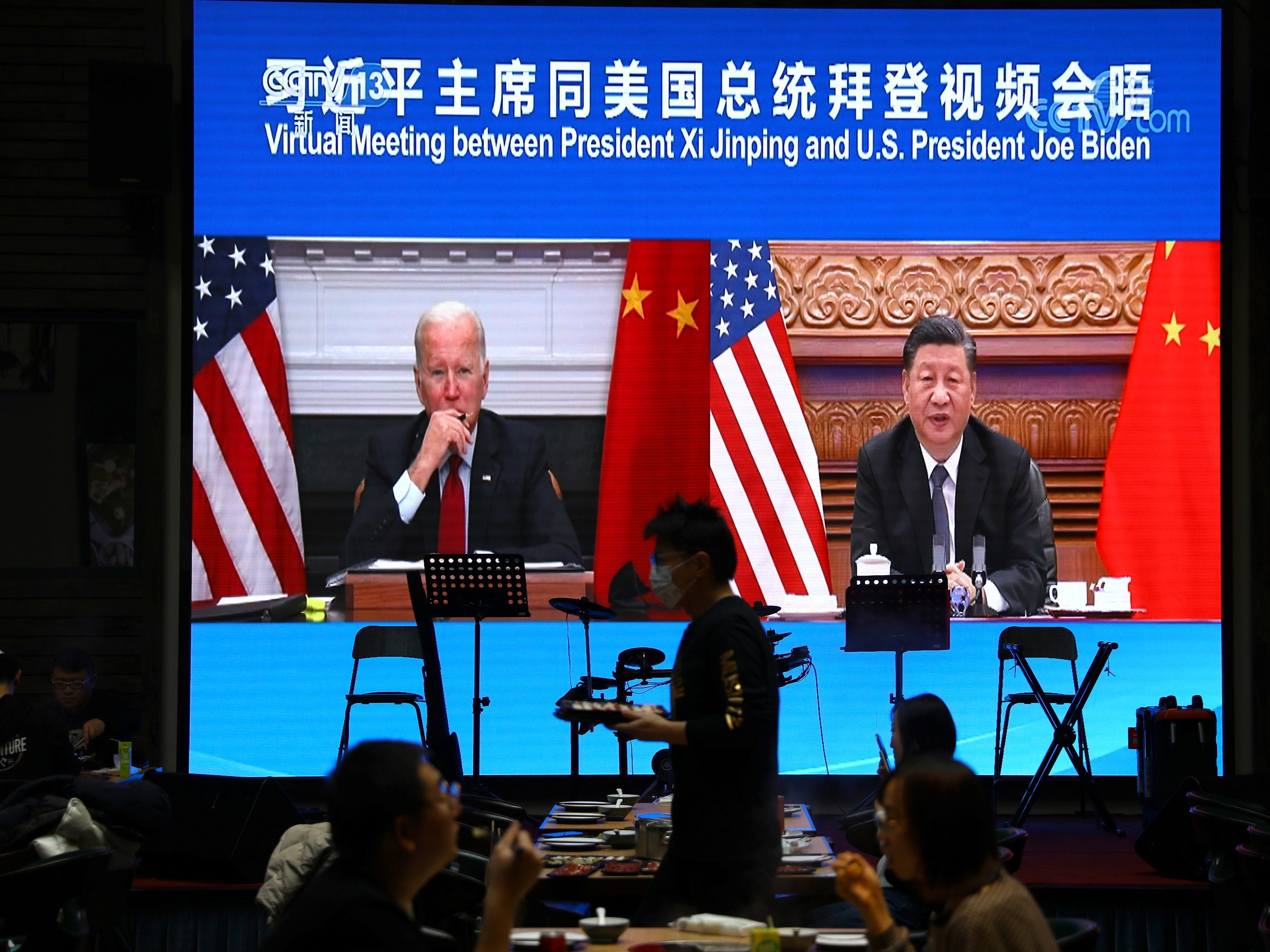 US President Joe Biden and Chinese President Xi Jinping at their virtual meeting.

US stock futures drifted, as investors focused on talks between US President Joe Biden and Chinese premier Xi Jinping.
Stocks have been rattled of late by concerns over inflation that pushed up government bond yields.
The crypto market took a beating after China warned state firms about mining, with bitcoin sliding below $60,000.

US stock futures edged lower Tuesday as investors assessed a key meeting between US President Joe Biden and Chinese leader Xi Jinping, while cryptocurrencies took a battering from warnings from Beijing.

Futures on the S&P 500, the Nasdaq 100 and the Dow Jones fell around 0.1-0.2%, echoing the softer tone on the benchmark indices on Monday, but were still within sight of November's record highs.

Biden and Xi reiterated their role in avoiding conflict during hours of talks on Monday.

"It seems to me our responsibility as leaders of China and the United States is to ensure that our competition between our countries does not veer into conflict, whether intended or unintended," Reuters quoted Biden as saying.

The world's two biggest economies disagree on a number of key issues, such as trade, China's pressure on Taiwan and how the Covid-19 pandemic started.

"It's now over, with the first press statement from the White House a pretty bland reflection of topics covered at the meeting without suggesting any major announcements are likely," Deutsche Bank strategist Jim Reid said.

"There has been no mentions of tariffs being discussed, but we'll likely hear more detail later on, so keep your eyes peeled on the screens for that."

"At first glance, it seems like it was a co-operative meeting, but with little of substance likely to have come out of it. We will see," he added.

The offshore yuan hit a five-month high against the dollar Tuesday, reflecting growing investor confidence in the strength of US-China relationships. Given that yuan strength, the Shanghai Composite closed 0.3% lower, while Hong Kong's Hang Seng gained 1.3%.

The MSCI All-World index was last trading flat on the day, having hit record highs a week ago. In Europe, the Stoxx 600 rose 0.2%, having touched all-time highs earlier thanks to gains in telecoms, banks and travel stocks.

UK blue chips were little moved by data showing a swifter pick-up in the British labor market, which could prompt the Bank of England to raise interest rates sooner than expected. The FTSE 100 was last flat on the day, while sterling gained broadly, rising 0.3% against both the dollar and the euro.

Another inflation-driven spike in government bond yields the previous day took some wind out of the equity market's sails. US 2-year Treasury yields, the most sensitive to shifts in investor expectations for inflation, have been cranking higher for the last three months. They are now at their loftiest since March last year, yielding 0.524%, unchanged on the day.

"The market was very surprised by the very strong inflation print in the US last week," Bank of America strategist Athanasios Vamvakidis said.

"We expect the Fed to change its communication to a more hawkish tone. The Fed will have to prepare markets for an earlier and faster tightening cycle, in our view."

On Monday, Biden signed a massive $1 trillion infrastructure bill into law, bringing fresh federal money for roads and bridges, and a blow to the cryptocurrency market.

Furthermore, the Chinese government warned state companies about crypto mining, and said it was considering taking punitive steps, according to a Bloomberg report.

Bitcoin was last down 9.9% at around $59,425 — heading for its biggest one-day fall since early September and dropping below the key $60,000 level for the first time in November, based on Coinmarketcap data. Losses mounted across other cryptocurrencies, with ether down 11%, and cardano down 12%.

"Even if the comments aren't entirely new, negative crypto-related comments from Chinese authorities have historically led to a selloff in the crypto market," FXEmpire analyst Olumide Adesina said.

The Case Of Justin Sun of Tron, Are His Antics Good for TRX?