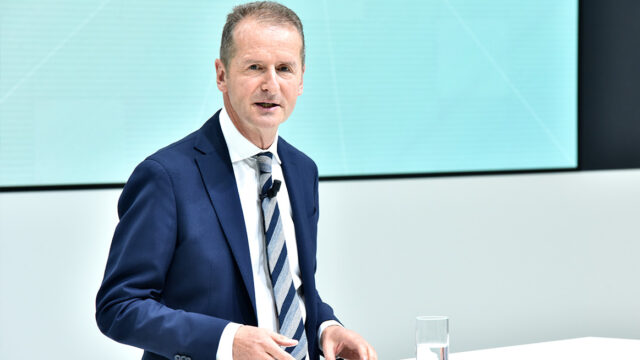 Volkswagen’s Herbert Diess was not offered a contract extension from the German automaker’s supervisory board after discussions turned heated following a conversation regarding the company’s transition to electrification.

Reuters reported on Monday that Volkswagen had met to talk about a possible contract extension that would see Diess run the European giant’s automotive operation for years to come. Diess reportedly demanded an early contract extension and requested that more of the company’s funds be set aside to help accelerate his attempts to create an electrified lineup of vehicles at Volkswagen.

However, things did not go as planned for the 62-year-old man from Munich, Germany. Although VW’s Board is showing plenty of support for Diess moving forward and has made plans to adjust its budget, it made no mention of a possible contract extension that would see the current CEO maintain his post past April 2023 when his ties with the company are set to expire.

Volkswagen’s board indicated that Diess had its “full support not only when it comes to the new orientation towards electromobility and digitalization, but also the increase of efficiency and profitability.”

Amidst Tesla’s growing lead in the EV sector, VW boss rallies his troops to avoid being the next Nokia

Diess had initially been met with resistance from VW’s board when he brought efforts to light concerning the company’s disbursement of finances toward the EV movement. He reportedly clashed with VW’s Chief Labor Representative, Bernd Osterloh, over management board appointments and Diess’ requested contract extension. Diess has been a major proponent in Volkswagen’s push toward introducing a fully-electric lineup and wished to lower costs in Germany to make more money available for tech and R&D developments to assist in the company’s electrification efforts.

After the Monday meeting, Volkswagen’s non-executive board unanimously voted to support Diess’ wishes to transform the company into an EV powerhouse, focusing on e-mobility and digital tech advancements. However, no mention of Diess’ contract was made in the statement, and his future past 2023 remains in question.

“Over the coming years, the executive board will implement this strategy under Herbert Diess’ leadership,” the Supervisory Board said. With the changing narrative in the automotive market from gas to electric, Diess appears to be the right man for the job at Volkswagen, and the company sees him as an asset moving forward.

The company plans to cut fixed costs by 5% by the end of Q1 2021 to free up funds for the electrification push, the Associated Press reported.

Volkswagen is set to make several changes to its Board. Arno Antlitz is expected to become the Chief of Finance, while Thomas Schmall will become the new Technology Divison head. Murat Aksel will move from Head of Procurement at VW to the same role for the Volkswagen Auto Group, which handles brands like Audi, Bentley, Porsche, Lamborghini, and VW.

SpaceX completes $850M equity funding round, raising valuation to ~$74B

Tesla Autopilot Abusers need to be held accountable, but how?