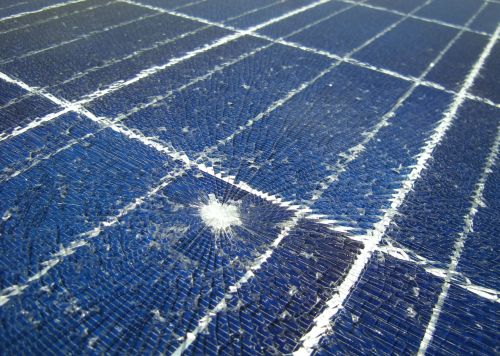 Amid the hype and misinformation swirling around Tesla's electric vehicle drama, it's easy to forget that Tesla is also the owner of SolarCity, once the largest residential solar installer in the world.

Elon Musk acquired/rescued his cousins' troubled firm, SolarCity, about two years ago for $2.6 billion in stock and the assumption of approximately $3 billion in debt. Sunrun has since replaced SolarCity as the leading third-party-ownership financier, while solar installations have plunged at Tesla.

Tesla deployed 84 megawatts of solar systems in Q2, an increase over the previous quarter's 76 megawatts. But as a point of reference, SolarCity installed 272 megawatts in the last quarter of 2015.

Tesla expects solar volumes to remain “relatively stable” despite having completely changed its sales strategy — selling solar exclusively at its retail locations and online. SolarCity's door-to-door sales channel was dropped, as was its in-store partnership with Home Depot. Tesla laid off 9 percent of its workforce in June of this year and the solar group has seen its own additional layoffs, facility closings and turmoil.

So, how is Tesla's residential solar group performing? The EV builder is not very transparent about this aspect of its business.

Tesla provides a figure on total solar megawatts installed but doesn't break it down by residential versus commercial. That's left to clever people like Wood Mackenzie Senior Solar Analyst Allison Mond, who calculates that Tesla installed 53 megawatts of residential solar in each of the first and second quarters of this year. That's about 20 percent of its peak deployment.

Tesla doesn't go into the details of its solar business in its quarterly investor letter, and is tight-lipped in the glare of Musk's recent lysergic musings.

So, where can we go for insight?

With the caveat that Yelp is self-selecting and people tend to complain online more than praise, here is a less-than-scientific sample of reviews from that site. Yelp is a local-based app and gave me reviews for the San Francisco Bay Area — from San Jose in the south of Silicon Valley to Marin in the north. I sorted through a total of 304 reviews and tallied only those from this year and last.

I'm not sure what type of statistical distribution that might be.

Here are excerpts from some reviews.

Now that I've gotten that over with…

“Worst customer experience ever,” according to Amy B B.

“Worst customer service I have ever encountered, ” lamented Carlos U.

“At this point, I am absolutely incensed,” bellowed Jared P.

“No one ever follows up and every time I called, I needed to explain my scenario over again and again. Needless to say that I am truly disappointed with their incompetence. They may sound and look efficient but no customer service for me.”

Most of the negative reviews stemmed from an equipment failure or remodel or utility dispute that did not receive service from customer service. Many of the positive reviews had yet to require a service call.

A SolarCity representative gamely attempted to respond to the Yelp reviews, good and bad, but got deluged by the one star-people.

Crucial couple of quarters ahead

Tesla's board presides over a debt-laden, billion dollar-burning genius machine, currently under criminal investigation by the Securities Exchange Commission. So, a relatively small, money-losing PV installation business with illusory solar roof tiles and an over-hyped Buffalo PV cell factory might not at the top of management mindshare.

Part of the debt assumed by Tesla in the SolarCity acquisition comes due next month ($230 million to be exact) and will likely be paid off in cash. The larger, more existential debt challenge for Tesla is the $920 million due in March 2019.

Musk once suggested that Tesla's energy unit was the future of the firm. Lately though, Tesla seems to be neglecting the solar business — and there's little reason to anticipate a substantial recovery in the coming quarters.