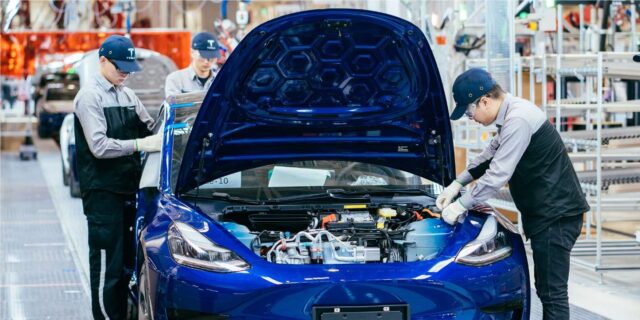 A recent survey showed that Tesla’s Made in China Model 3 was ranked as the highest quality sedan in the second quarter of 2020 in the country, citing only .7 complaints per 10,000 vehicles. While the data shows the Model 3 is striking a chord with its Chinese consumers, it also shows the quality of the company’s products that are manufactured at Giga Shanghai.

The findings concluded that the Tesla Model 3 sedan that is manufactured at the company’s Chinese production facility located in Shanghai is the highest-quality sedan available to consumers in China. Owners of the all-electric vehicle indicated that complaints were nearly obsolete for the Model 3, stating that less than one complaint was registered per 10,000 cars sold.

, topping all 37 other models foreign or domestic. This is the 1st time Model 3 ranks top spot in the findings. @elonmusk @teslacn pic.twitter.com/MTltHrNe2V

Perhaps the most striking piece of information gathered from this data is the fact that the Made in China Model 3 is experiencing less criticism on a grand scale than other vehicles, despite the company only producing the car at its Shanghai factory since January 2020. Although Tesla’s workers in China have only been building electric cars for consumers for a short period, the quality of manufacturing is the highest based on the data.

The survey is a testament to the quality of Tesla’s vehicles in Shanghai and the improvements the company has made in manufacturing. When new cars are introduced to an automaker’s fleet, there are bound to be small errors in production that can be recognized as “build quality” issues. These include panel gaps, paint chips, misaligned headlights, faulty buttons and levers, and small cosmetic errors, among many other things.

Tesla, like many other car companies, has had issues in the past with the build quality of its new cars. When owners take delivery of their new electric vehicles, they are required to inspect the car to take notice of any issues there may be cosmetically or functionally. If a problem is spotted, Tesla will take care of the issue to ensure the customer is happy with their purchase. Unfortunately, there have been instances where owners have declined the delivery of their new car because of an excess of quality issues.

This issue isn’t exclusive to Tesla, however. Many automakers experience build quality complaints with their cars. It is a product of accelerated manufacturing to keep up with demand, and companies are bound to make mistakes sometimes.

However, less than one complaint per 10,000 vehicles is an impressive accomplishment for the Giga Shanghai team. To have such low numbers on a massive scale shows Tesla’s manufacturing efficiencies are improving, and the company’s quality is going up amidst demand that continues to increase in China.

The Made in China Model 3 was the most popular electric car in the world in June, registering over 35,000 units sold during the month, according to the EV Sales Blog.

That’s something to dance about.

Kylie Jenner is the Most Searched Celebrity During Quarantine