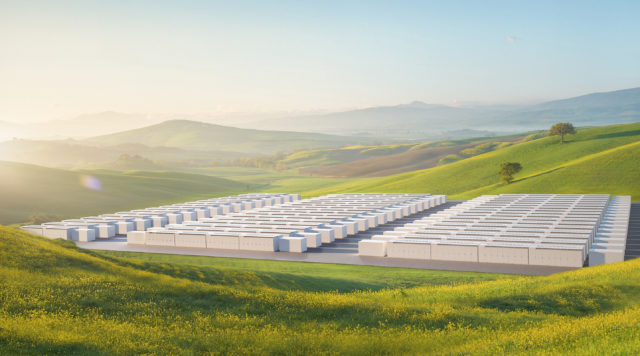 Tesla has launched a new utility-scale energy storage product called Megapack modeled after the giant battery system it deployed in South Australia as the company seeks to provide an alternative to natural gas “peaker” power plants.

Megapack is the third and largest energy storage system offered by Tesla. The company also sells the residential Powerwall and the commercial Powerpack systems.

Megapack, which Tesla announced Monday in a blog post, is the latest effort by the company to retool and grow its energy storage business, which is a smaller revenue driver than sales of its electric vehicles. Of the $6.4 billion in total revenue posted in the second quarter, just $368 million was from Tesla’s solar and energy storage product business.

Tesla did deploy a record 415 megawatt-hours of energy storage products in the second quarter, an 81% increase from the previous quarter, according to Tesla’s second-quarter earnings report that was released July 24. Powerwalls are now installed at more than 50,000 sites.

The Megapack offering could provide an even bigger boost if Tesla can convince utilities to opt for it instead of the more common natural gas peaker plants used today. And it seems it already has.

The so-called Megapack was specifically designed and engineered to be an easy-to-install utility-scale system. Each system comes fully assembled — that includes battery modules, bi-directional inverters, a thermal management system, an AC main breaker and controls — with up to 3 megawatt-hours of energy storage and 1.5 MW of inverter capacity.

The system includes software, developed by Tesla, to monitor, control and monetize the installations, the company said in a blog post announcing Megapack.

All Megapacks connect to Powerhub, an advanced monitoring and control platform for large-scale utility projects and microgrids, and can also integrate with Autobidder, Tesla’s machine-learning platform for automated energy trading, the company said.

Megapack was inspired by Tesla’s Hornsdale project, which combined its 100 MW Powerpack system with Neoen’s wind farm near Jamestown in South Australia. The Tesla Powerpack system stored power generated by the wind farm and then delivered the electricity to the grid during peak hours. The facility saved nearly $40 million in its first year.

Tesla hopes to be the sustainable alternative. And in states like California, which have ambitious emissions targets, Tesla could gain some ground. Instead of using a natural gas peaker plant, utilities could use the Megapack to store excess solar or wind energy to support the grid’s peak loads.

The Tesla of Electric Motorcycles: The Arc Vector

EGEB: Yang says too late on climate change – move to hills, California may...

Elon Musk tweeted a piece of misinformation about children being ‘essentially immune’ to coronavirus,...