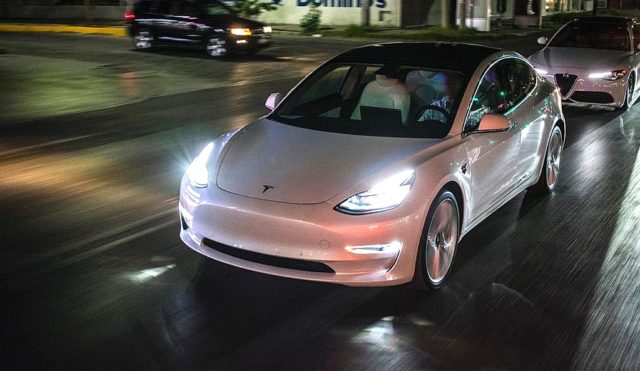 The Tesla Model 3 has been dubbed by the Insurance Institute of Highway Safety (IIHS) as the car with the best headlights in the market today. The rankings were part of a list from the insurance institute ranking the Top 5 cars currently available that are equipped with the best and worst headlights.

The Tesla Model 3’s headlights received a “Good” rating, the highest possible score, from the IIHS due to the their impressive visibility when testing on straightaways and curves. Among the cars that the IIHS tested, the Model 3’s headlights proved the best, hitting the right amount of illumination without being too bright for other motorists.

The Model 3’s headlights have not always received a “Good” rating from the IIHS. During its initial tests with an early production Model 3, the institute gave the all-electric sedan’s headlights an “Acceptable” rating due to glare exhibited by the vehicle’s low beams. This score was later revised when the IIHS evaluated a later Model 3 build (June 2018 or later), which received the elusive “Good” headlight rating.

A vehicle’s headlights can obtain one of the four IIHS ratings, “Good,” “Acceptable,” “Marginal,” and “Poor.” The car is then placed on a set starting point and rated in “Lux,” a unit of measurement for headlights. In order to obtain a “Good” rating, the headlight must provide 500 feet of illumination on a straightaway, and between 225 and 275 feet of light, all while emitting 5 lux of light.

All Tesla vehicles feature LED reflector headlights for both high beam and low beam functionality. The IIHS relies on a headlight’s low beam performance more heavily than its high beams. This is due to usage during normal driving, where low beams are utilized more often than high beams. Fortunately for the Model 3, the presence of automated functions also helped its headlights’ overall score with the IIHS.

These are the Dodge Charger and Chrysler 300 at 5th place, the Honda Civic and Acura ILX at 4th place, the Chevy Bolt at 3rd place, and the Toyota Yaris at 2nd place. Quite painfully, all of Volkswagen’s cars received “Poor” and “Marginal” ratings from the institute, resulting in the IIHS giving the German automaker’s entire car lineup the 1st place in its “worst headlights” list.

The IIHS’ recent Top 5 best and worst headlight rankings are limited to cars only and thus, do not include pickup trucks, SUVs, or crossovers.

You can watch the full video on the Top 5 Best and Worst cars with headlights below.